The US Air Force (USAF) recently demonstrated a process for converting commercial-grade jet fuel to military-grade fuel, an ability that could give commanders greater flexibility in planning combat operations.

The process could let US military aircraft refuel at commercial airports, allowing them to operate from more locations. That could make it difficult for adversaries to predict from where aircraft might land and take off. 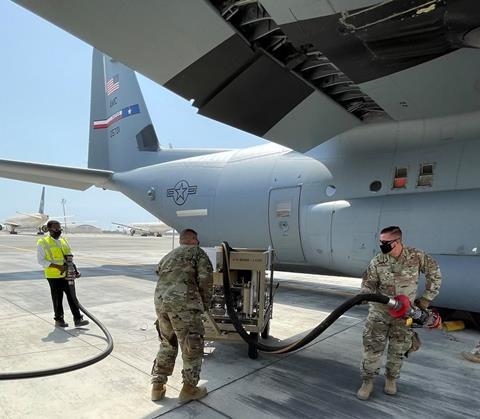 The fuel conversion process was demonstrated by the 379th Expeditionary Logistics Readiness Squadron, together with US Air Force Central Command, at King Abdulaziz International airport in Saudi Arabia in May, the service said on 16 June.

The USAF claims the commercial-to-military-grade fuel conversion practice has not been used since the Vietnam War.

“This operation was to test the air force’s ability to land in a commercial location, take commercial-grade fuel and then convert it into the type of fuel used by US military aircraft for optimal operations,” says Master Sergeant Brandon Geiger, 379th Expeditionary Logistics Readiness Squadron fuels information service centre section chief.

The USAF did not disclose what fuels were part of the demonstration. Typically, commercial airliners burn Jet A-1, a kerosene-grade fuel that works for most turbine-engined aircraft. The US military uses an equivalent of Jet A-1 called JP-8, which includes corrosion-inhibiting and anti-icing additives, according to Royal Dutch Shell. Most NATO air forces also use JP-8.

“With this cart, we are able to use fuel, in various austere locations, that isn’t already made for our aircraft by injecting the three essential additives our planes need to fly: a corrosion inhibitor, static dissipater and fuel system icing inhibitor,” says Geiger.

The commercial-to-military-grade fuel conversion is meant to aid Agile Combat Employment, a USAF strategy to disperse combat aircraft across many different airfields, including remote bases. Dispersion is intended to make it difficult for adversaries to simultaneously hit multiple aircraft on the ground with missiles.

The Agile Combat Employment strategy is particularly important to the USAF in the Pacific region, where the service envisions aircraft landing on austere island airstrips. Using a variety of airfields for operations complicates China’s ability to track and attack aircraft with its arsenal of long-range ballistic and cruise missiles.

The USAF also is practicing its Agile Combat Employment strategy in other theatres, including the Middle East.