The Australian Army has taken delivery of two Boeing CH-47F helicopters, the first of four obtained under a recently approved acquisition.

According to Australia’s Department of Defence (DoD), the two rotorcraft were delivered to Townsville in the country’s Queensland state aboard a US Air Force Lockheed Martin C-5M strategic transport. 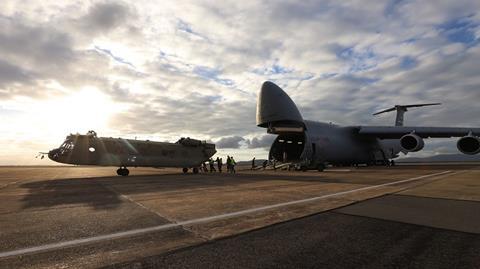 The delivery comes just three months after the sale was approved. The helicopters, which will serve with the army’s 5th Aviation Regiment, were delivered shortly before Australia’s Talisman Sabre exercise.

The third and fourth examples will be delivered by middle of 2022.

“The Chinook is Defence’s largest helicopter, with a long and proven track record of supporting ADF operations in Australia, our near region and further afield.”

The DoD pegs the value of the four-CH-47F deal at A$595 million ($444 million). This is significantly higher than April’s Defense Security Cooperation Agency sale notification, which gave an estimated value of $259 million.

“By working closely with the United States, through streamlined processes to rapidly deliver Defence capability, the government is demonstrating its commitment to Defence’s strategic objectives and, in this case, bolstering Defence’s aviation capability,” says Dutton.

The delivery comes as the Australian army suffers a defeciency in airlift capacity owing to the grounding of the NH Industries MRH90 Taipan fleet since May, owing to sustainment issues.

“Defence and Airbus Australia Pacific are currently working collaboratively to return to MRH90 fleet to flight operations as soon as possible,” says the DoD.

The delivery brings the Australian CH-47F fleet to 12 examples. Prior to the delivery, the average age of Canberra’s F-model Chinooks was 5.7 years.

Updated with grafs about Taipan grounding, and DoD’s response.