Norwegian signs pact to to pursue network link-up with Wideroe

Norwegian has signed a letter of intent to co-operate with compatriot carrier Wideroe under a partnership which aims to link their respective networks.

The two Norwegian-based operators say the initiatives being looked at include co-operation on ticket sales to enable passengers to travel across the route network of both carriers through an interline agreement. 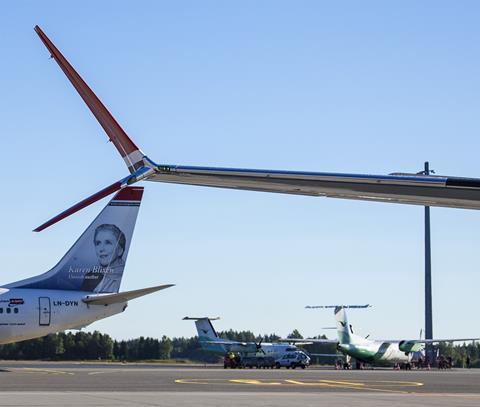 Norwegian chief executive Geir Karlsen says: ”In many ways, this is an historic agreement bringing two Norwegian airlines together. A lot of detail is still being worked on but it’s clear from the past months’ discussions with Wideroe that there are many areas we both have a common interest to collaborate on.”

Wideroe chief executive Stein Nilsen adds: ”The combination of Wideroe’s network along the coast and in northern Norway and Norwegian’s large European route network will create many new travel opportunities for our common customers.

”This new collaboration has been requested by our passengers for many years, so it is brilliant to share this news now. We still have a way to go before the agreement is final, but we work well together and have a common goal that this should be implemented as quickly as possible.”

A tie-up between the two carriers would add further pressure in the Norwegian market to Scandinavian carrier SAS, once the owner of Wideroe, which is working to restructure after earlier this month filing for US Chapter 11 bankruptcy protection.