Swedish investigators have found that incorrect installation of a Bombardier CRJ900’s nose-wheel steering sensor resulted in rudder-pedal deflection inputs being reversed, before the jet suffered an excursion during take-off from Gallivare.

The Nordica aircraft had been departing runway 30 for a service to Stockholm on 9 September last year. Its crew had been aware that maintenance had been carried out on the nose-wheel steering system the day before.

Although the crew had taxied the CRJ900 to the runway, the aircraft “immediately” turned left after the brakes were released and the jet began to roll for take-off.

The captain tried using the right rudder pedal to correct the course but was unsuccessful, and aborted the roll, the aircraft eventually stopping with its nose-wheel outside the runway.

“Flight data showed that nose-wheel steering with the rudder pedals steered the aircraft in the opposite direction from that expected,” says Swedish accident investigation authority SHK. 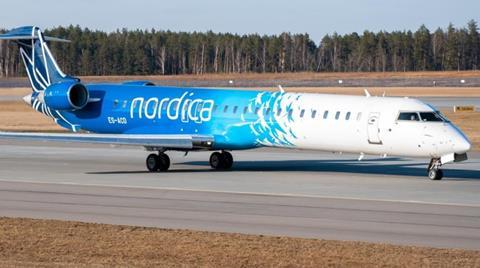 After several remarks about steering, the jet underwent maintenance the day before the incident

Maintenance had been undertaken on the previous day, following several technical remarks regarding the steering, describing how the nose-wheel was not centred after the jet had been parked without power.

When a taxi test revealed the aircraft was steering to the left, without correction, the carrier’s maintenance organisation opted to replace the rudder-control sensor.

SHK says the sensor on the aircraft (ES-ACD) was taken from a sister aircraft (ES-ACB). The technician performing the work told the inquiry it was his first time replacing the component.

Investigators found that the sensor design included a spline which had mistakenly been inserted 90° clockwise from its correct position, a situation made possible by a broken clockwise stop in the component.

SHK says this meant the sensor could be wrongly fitted without any system warnings, but that this would reverse the polarity of the electrical output and cause a reversal of the rudder-pedal nose-wheel steering.

“The maintenance manual did not describe that a verification of the sensor function should be performed before installation,” it says, adding that the manual also “lacked a clear description” of how the sensor shaft should be aligned when fitted.

“After installation of the sensor, neither the steering direction nor the angle of the deflection was verified during a function test of the nose-wheel steering with the rudder pedals.”

SHK says the technician filmed a steering test on his phone, during which he sat in the cockpit turning the nose-wheel tiller. The film showed the steering linkage moving in both directions.

But although he pressed the rudder pedals to check the steering range, he did not film the steering deflections. SHK says the technician “assumed” the steering worked.

The CRJ900’s type certificate has been transferred from Bombardier to Japan’s MHI RJ Aviation, which compiled details of four incidents since 2015 involving reversed rudder-pedal steering, two of which – including the Nordica event – occurred last year in the space of a month.

MHI RJ has introduced temporary revisions to the aircraft maintenance manual regarding the removal, rigging and functional check of rudder-control sensors, including clarifications of procedures, additional steps, and changes to illustrations.