Few details on the immediate effect of an Iranian surface-to-air missile strike that brought down a Ukrainian Boeing 737-800 over Tehran have emerged in the investigators’ final analysis.

As a result little is clear about the damage to, and dynamics of, the aircraft following the attack. The last recorded information shows the aircraft in stable flight at 250kt, pitched 9.6° nose-up, at an altitude of 7,947ft – equivalent to 4,380ft above ground.

This, along with the cockpit’s escaping the initial explosion, suggests the strike occurred in the vicinity of the aircraft’s lower mid-section.

Although the engines were found to have been functioning, with “no [sign of] explosion or severe fire”, the inquiry says the aircraft sustained “cascading” damage and one of the integrated drive generators – which are located in each engine – began to slow about 16.5s after the detonation. The cockpit-voice recorder ceased operating 2.5s later. 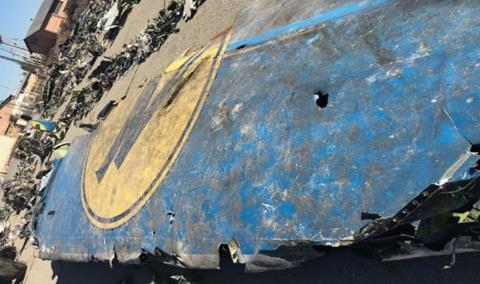 “Evidence from the aircraft wreckage, and videos and images obtained, suggested the occurrence of a fire in parts of the aircraft before the ground impact,” says the inquiry. “The fire was observable in the front cabin and on its left side.”

There is evidence of the fuselage having been holed, it states, and that smoke from the cabin fire emanated from these holes and left traces of thick smoke.

“It could not be determined if the occupants of the aircraft were injured prior to impact,” it adds.

No explosives contamination was found on objects inside the passenger cabin and tests on metal fragments in some passenger seats showed they were from aircraft alloys and not missile shrapnel.

“As civil aircraft are not designed and manufactured in a way to be missile-resistant, the analysis of the way the missile affected the aircraft systems is pointless to safety enhancement aims,” says the inquiry, adding that the severity of the eventual ground impact did not, in any case, make such an analysis practicable.