Hong Kong investigators have identified an improperly-installed bypass valve port as the cause of a fuel leak that led to an engine fire on a UPS Boeing 747-8 Freighter.

Releasing its final report into the 20 July 2021 incident, Hong Kong’s Air Accident Investigation Authority (AAIA) says the valve port was found to be “finger loose”, with a gap between the fitting and the housing of the fuel metering unit. 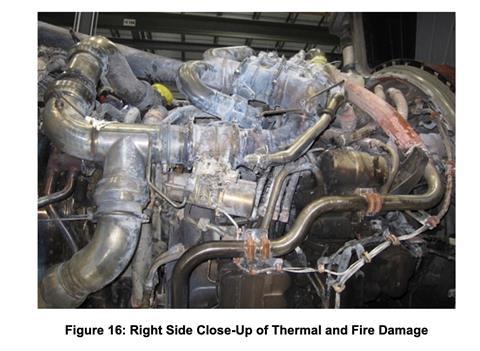 The No.1 engine of an UPS Boeing 747 freighter caught fire as a result of a fuel leak.

Operating as flight UPS3 to Dubai from Hong Kong International, as the 747-8F (N624UP) transitioned from take-off to climb, at about 300ft, the crew received a fan-speed exceedance warning for the left outboard engine. Despite commanding the engine to idle, it continued to oscillate around the take-off speed/overspeed limit “causing a loss of thrust control”, says the report.

As a result, around 4min into the flight, the crew opted to shut down the powerplant and return to Hong Kong. Some 12s later, an engine fire alarm was triggered. The crew discharged two fire extinguisher bottles but the fire warning continued, lasting approximately 9min 30s in total, and ending shortly before touchdown.

After landing in Hong Kong at 12:30 local, inspections by the airport’s fire department revealed no fire. However, 22min later white smoke and then flames were detected emerging from the engine, a GE Aviation GEnx-2B67/P turbofan. Additional suppressants were applied and the fire extinguished within 40s, says the AAIA.

Thermal damage was sustained to the engine exterior core. The engine pylon, thrust reversers, exhaust sleeve and cone were all removed and replaced. However, the rest of the aircraft was left undamaged, the report adds.

During the flight, the incorrect low pressure readings in the FMU caused by the leak were sufficient to cause the engine FADEC to request more fuel to avoid a flame-out, which in turn casued the fan overspeed.

Investigators believe the in-flight fire was caused by the auto-ignition of leaking fuel as it came into contact with hot engine components.This lasted around 10min in total, the report says.

Fuel remaining in the under-cowl area after shutdown, likely leaking as a result of “secondary damage” to fuel-carrying components, plus a significantly higher temperature due to the in-flight fire, was sufficient to permit the ground fire, the AAIA adds.

“The under-cowl area likely contained components above fuel auto-ignition temperature even after 22 minutes of shutdown,” it says.

The AAIA has recommended a 100% torque verification procedure that “minimises the likelihood” of an improper installation. GE has also advised operators to introduce a shim check inspection, to ensure the valve port is properly installed.

Cirium fleets data indicates the freighter was delivered to UPS in November 2020. The logistics company operates a fleet of 28 747-8Fs.