New TAP Air Portugal chief executive Christine Ourmieres-Widener has been in “listening mode” during her first few days in charge of the European operator, as uncertainty surrounds the business’s second tranche of state aid.

“We are still waiting for the EU approval of our restructuring plan, so it’s early days,” she told a FlightPlan event on 22 July.

On 16 July, the European Commission re-approved €1.2 billion ($1.4 billion) in state aid to TAP – delivered in the form of a rescue loan – but concurrently announced that it was investigating whether a proposed further €3.2 billion in restructuring aid was in line with EU rules.

That followed Portugal formally notifying the Commission on 10 June 2021 that it intended to provide €3.2 billion in restructuring aid to TAP through the airline’s parent company, TAP SGPS.

Amid that uncertainty, Ourmieres-Widener’s task at the Star Alliance carrier is “making sure the organisation has a future… to grow again and to welcome more passengers on board, safely”, she states, adding: “We have an indication of where we need to be in four or five years’ time: being a sustainable organisation, profitable… being the pride of the country.” 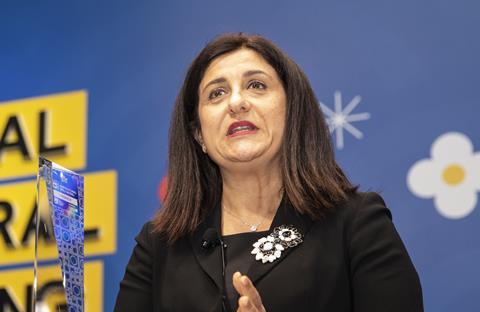 Her vision for the airline includes a recognition that a “full digital experience is not only a buzzword, it’s what we have to do… Airlines are step by step understanding how important it is to know their customers”.

She also aiming for the “engagement of all stakeholders” in TAP’s future.

But some 10 days since taking up the role, the former Flybe chief says she still needs “more time to listen, because most of the time solutions are known by your employees, your partners”.

“We have launched the last step of our collective dismissal plan and we will see a number of colleagues leaving… to reach the total of 2,000,” Ourmieres-Widener says.

Those job cuts – which will see the business’s workforce fall from 10,000 pre-pandemic to around 8,000 by the end of 2022 – are part of a restructuring plan announced towards the end of 2020, which sets out a package of measures for streamlining TAP operations and reducing costs. It intends to achieve those aims through the divestment of non-core assets, and the restructurings of TAP’s mainline carrier and regional until Portugalia, which operates under the TAP Express banner.

Specific measures announced also include widespread pay cuts, a fleet reduction – which the Portuguese government previously suggested would see at least a dozen aircraft cut from TAP’s pre-crisis fleet of around 100 jets – and a consolidation of the operator’s network.

The €3.2 billion in new state aid would take the form of approximately €2.73 billion of equity and “quasi equity” measures, which include converting the €1.2 billion rescue loan into equity. Additional support of approximately €512 million would be provided in the form of a state guarantee of commercial loans, if the airline is unable to access financial markets in the 2023-2025 period.

The Portuguese government took back control of TAP last year as the carrier struggled with the impact of the pandemic.