Russian aerodynamicists are conducting buffet analysis of the Sukhoi Superjet 100’s horizontal stabiliser to explore potential improvements for the ‘SSJ-New’ version of the aircraft.

The phenomenon can result in oscillations of the tail from wake aft of the wing.

Moscow’s Central Aerohydrodynamic Institute says it is examining the stabiliser’s performance in take-off and landing phases, on behalf of airframer Irkut which oversees the Superjet programme.

The SSJ-New is intended to have a greater proportion of Russian-built systems including Aviadvigatel PD-8 engines.

“Our main task is to predict how buffeting will manifest itself under natural conditions,” says the institute’s aeroelasticity and load department head Anatoly Krapivko.

“This is necessary to reduce the risk of this dangerous phenomenon on the proposed SSJ-New.” 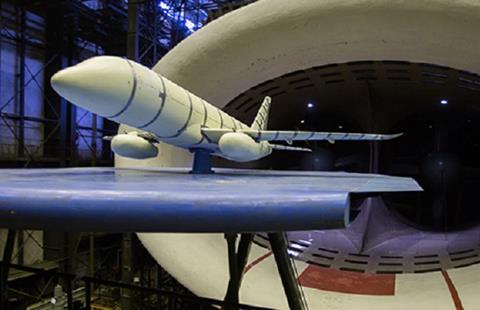 Various configurations and angles of attack have been analysed

The institute says further work in July-August will consider options to modify the design of the tail in order to reduce the intensity of buffet or even eliminate it.

Windtunnel tests have been conducted on an aircraft model with a simulated runway, at different angles of attack, using various configurations of flaps, speedbrakes and spoilers.

Researchers have been able to obtain preliminary estimates of the buffet and vibration characteristics using spectral analysis and visualisation of the airflow around the model.

The institute says its measurements are “to a certain extent consistent” with vibration data from the Superjet 100 during landing, and that the configurations explored with the model give the “expected effects” on the buffet.

“Scientists will continue to search for ways to improve the design of the SSJ-New to prevent hazardous aeroelasticity phenomena in all flight phases,” it adds.