​ANALYSIS: Fire and fury, the next Korean air war

A second Korean conflict has never been far from the minds of American and South Korean defence planners. The conflict of 1950-1953, which claimed over 1 million lives, never actually ended: an armistice stopped the fighting, but technically Seoul and Pyongyang are still at war, pending a "final peaceful settlement". This seems as remote as ever, with North Korea ramping up its ballistic missile programme and refining its nuclear weapons. Meanwhile the unpredictable, often jingoistic, messaging of President Donald Trump has stoked tensions. The stage is set for a miscalculation that could lead to war. However a conflict actually starts, there can be no doubt that one of Seoul's and Washington's trump cards is airpower.

Despite the ramshackle nature of North Korea's military, allied air forces would have a long, tough fight. In addition to eliminating North Korea's obsolete air force, they will be tasked with several urgent missions in what will probably be a fast escalating conflict. The list includes “decapitation” missions against senior leaders, shutting down North Korea's bristling air defence network and destroying artillery hidden in mountainous terrain north of Seoul. It will also need to perform close air support for what could be a ferocious land battle along the border. A key strategic mission will be locating, and destroying, North Korean ballistic missiles. 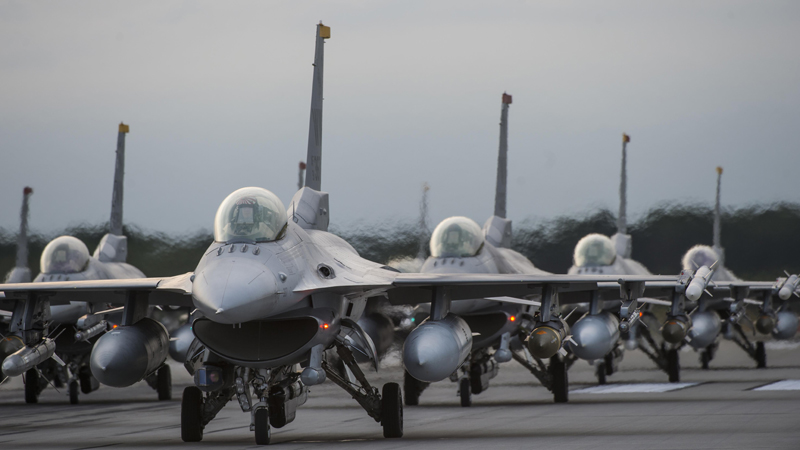 Seoul's military is backed by a massive local presence of US Air Force assets, including these Japan-based F-16s

These fleets are similar in size, but they could not be more different. Pyongyang's fleet comprises Cold War types from the former USSR and China. The most modern aircraft are 35 MiG-29s. These are backed up by other Russian types such as the MiG-23, MiG-21, Sukhoi Su-7, and Su-25. It also has a large complement of Chinese combat aircraft such as the Shenyang F-5 and F-6 (based on the MiG-17 and MiG-19), the Chengdu F-7 (a MiG-21 copy) and even the Harbin H-5 bomber (a copy of the Ilyushin Il-28).

On paper, North Korea has a large fleet of combat and transport helicopters, including 20 Mil Mi-24 Hinds. The ability of Pyongyang's helicopters to operate will be sharply curtailed in an environment of allied air superiority or supremacy. North Korea also has 84 MD Helicopters MD500s, obtained illegally from West Germany in the 1980s. It is believed that some of these could infiltrate South Korean airspace, given that Seoul itself operates nearly 300 MD500s.

Defence experts tend to agree that a large number of Pyongyang's combat aircraft are out of commission. Even were they fully serviceable, the combat utility of such dated platforms is open to question. In a war, more North Korean aircraft are likely to be destroyed on the ground by air and sea-launched cruise missiles than in air battles with allied fighters.

Another glaring North Korean weakness is a lack of airborne early warning & control (AEW&C) and C4ISR (command, control, communications, computers, intelligence, surveillance, reconnaissance) assets. Despite publicity footage of North Korean leader Kim Jong-Un hobnobbing on the apron with MiG-29 crews, it is unclear how much flight time pilots receive. Even if they get sufficient time aloft, it is doubtful their combat training realistically prepares them for the formidable capabilities of South Korean and US airpower.

South Korea's air force, by contrast, is among the most powerful in Asia-Pacific, featuring well-trained personnel and a powerful line-up of world-class aircraft. The mainstay of the force is its fleet of 59 advanced Boeing F-15K “Slam Eagles”, and over 120 Lockheed Martin F-16C fighters – the latter of which are undergoing a major avionics and radar upgrade. The F-15s can carry the Taurus KEPD 350 cruise missile, which can deliver a 481kg warhead to high-value targets anywhere on the Korean peninsula. Seoul conducted a successful test firing of this weapon in September in response to Pyongyang's most recent nuclear test.

The F-15Ks and F-16s are backed up by a dated, yet still potent, force of Northrop F-5E Tiger IIs and McDonnell Douglas F-4E Phantoms. Seoul is gradually replacing the Tigers and Phantoms with the indigenously produced Korea Aerospace Industries FA-50 fighter, which is emerging as a key ground attack platform. In addition, Seoul operates the world's fourth-largest fleet of combat helicopters, with 709 rotorcraft. These comprise utility/transport types and attack helicopters, such as the Bell Helicopter AH-1J/S and a growing fleet of AH-64E Apaches.

It is also adding new types to boost its combat power. It has orders for 40 F-35 Lightning IIs that will be delivered from 2018 to 2021, and for four Airbus Defence & Space A330 Multi-Role Tanker Transports, which will arrive from 2019.

The USA can bring immense capabilities to bear, including tactical aircraft such as F-16s and Fairchild Republic A-10 Thunderbolt IIs based in South Korea, as well as F-15C air superiority fighters based in Japan. In a crisis, it will be able to deploy advanced types such as the Lockheed Martin F-22 Raptor, Northrop Grumman B-2 Spirit stealth bomber, and Boeing B-1B Lancer. B-1Bs operating from Guam have made several visits to South Korean skies following recent North Korean provocations. The USS Ronald Reagan, a Nimitz-class aircraft carrier, is forward deployed in Japan. Its embarked Carrier Air Wing Five – which bills itself as the only “911” air wing – comprising Northrop Grumman E-2D Hawkeye AEW&C aircraft, four squadrons of F/A-18 E/F Super Hornets, a squadron of EA-18G electronic warfare aircraft and helicopters. Additional carriers with similar capabilities could be rushed to North Asia in the event of a crisis. Should air bases be destroyed by North Korean ballistic missiles, carrier aviation would become even more critical.

The USA also has a full suite of strategic ISR platforms, from Boeing E-3 Sentries in the AEW&C role, to platforms such as the RQ-4 Global Hawk and E-8 JSTARS. It also has KC-135 Stratotanker refuelling aircraft based in the region.

All of these assets would be co-ordinated through the Combined Air Component Command – part of the Republic of Korea/US Combined Forces Command.

"Since the 1991 Gulf war, air supremacy has been decided within a day," he says. "In contemporary warfare, the first day is the most important for air power. On day one of the Gulf War, 1,000– 2,000 sorties were accomplished by the multinational forces against the enemy. If a conflict occurs in Korea, the air campaign will be very similar."

He says the first objective of the allies will be the decapitation of Kim Jong-Un and his senior leadership, in which armed UAVs could play a part. He also believes that B-2s escorted over enemy territory by F-22s will be "very effective platforms" for decapitation operations against Pyongyang.

Despite the usefulness of stealthy types in major conventional conflicts, stealth platforms are still relatively few in the US arsenal. Flight Fleets Analyzer shows that the US B-2 fleet numbers just 20 aircraft – and not all of these are likely to be available at one time. The US Marine Corps has a squadron of F-35Bs deployed in Japan, but the new type has yet to reach Asia in large numbers.

To open the door for less stealthy types, the allies need to neutralise North Korea's air defence network. Vasily Kashin, a senior fellow at Moscow's Higher School of Economics, and an expert on surface-to-air missile systems, says this could be more challenging than many realise.

"North Korea's air defence system is very massive," says Kashin. "It mostly consists of obsolete Soviet SAM systems, which were suppressed easily in places like Iraq and Libya, but there are some exceptions. North Korea has been able to produce a relatively advanced long-range SAM system designated the KN-06, which is comparable to early versions of the Russian S-300. It has been tested and is in mass production."

The KN-06 features a phased array radar and a semi-active homing missile with a range of 81nm (150km). Until North Korea's SAMs are taken out, the allies will be limited in their ability to deploy heavy, "bunker-busting" bombs from non-stealthy platforms. And, even when North Korean airspace is open for non-stealthy platforms, Kashin notes that Pyongyang is adept at building tunnels and bunkers.

"Even after you destroy all the air defence systems, there are reasons to believe that some of North Korea's underground shelters are so deep that they won't be affected by conventional bunker busters. The important command centres are very deep and protected by a high level of secrecy."

"North Korea features a dense air defence network consisting of fixed (SA-2, SA-3 and SA-5) and mobile (SA-13) surface-to-air missile batteries and anti-aircraft artillery, as well as man-portable air-defence systems (SA-7 MANPADS)," he says. "Such a saturation of interwoven and overlying capabilities – no matter the technological state – presents a challenge for any attacking force."

North Korea's SAM systems aside, another headache for allied air forces will be the masses of guns and rocket launchers, numbering in the thousands, just north of the de-militarised zone and 56km (35 miles) from Seoul, South Korea's biggest city and capital.

These weapons are effectively a knife held to South Korea's throat. The mountains in which they lurk are apparently honeycombed with hardened emplacements. It is expected that self-propelled guns will be able to pop out of their shelters, lob a few random shots toward Seoul, and hide before they can be counterattacked. This type of shelling in a major urban area would cause significant civilian casualties – a major army rotorcraft mission in the event of hostilities will be evacuating civilians farther south.

"Any aircraft that can drop ordnance will go after north Korean artillery," says David Maxwell, associate director at Georgetown University's Center for Security Studies. "Platforms that can deliver precision-guided munitions will be critical to this. In addition, South Korean and US artillery – both tube-launched and multiple-launch rocket systems – will be firing at every North Korean artillery location." 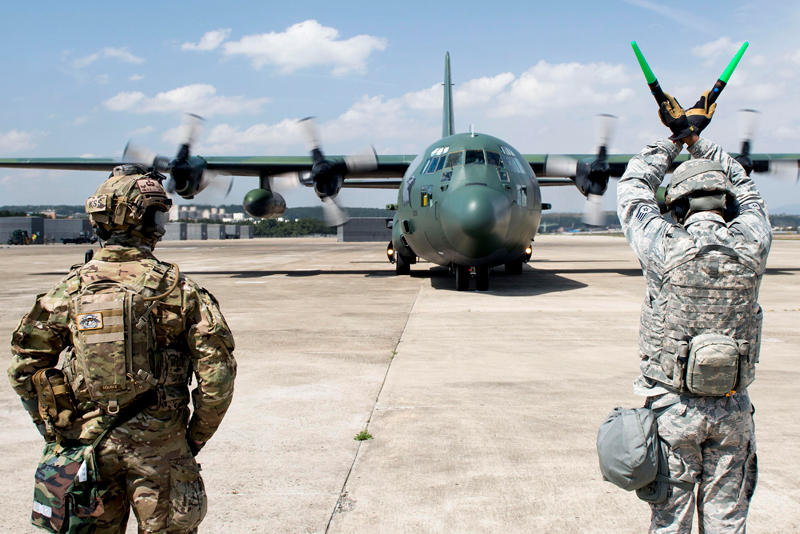 And not least is the challenge presented by North Korea's force of ballistic missiles, some of which could be equipped with nuclear warheads for attacking Seoul or Tokyo – US planners have war gamed a contingency in which a nuclear weapon strikes Tokyo. Kashin warns that tracking and destroying these systems will be extremely challenging. He notes that Saudi Arabia's modern air force has had limited success prosecuting ballistic missiles in the hands of Yemen's Houthi rebel group.

"Given that North Korea has been a focus of American and South Korean interest for a considerable time, it's been pretty well looked at in terms of geospatial intelligence over a prolonged period," says Douglas Barrie, senior fellow for military aerospace at the International Institute of Strategic Studies.

"The upside of this is that you have a fairly reasonable understanding of the order of battle and fixed locations, and the pre-surveyed sites. The downside is that North Korea seems to be a fairly paranoid state, which behaves in such a way that it's going to try and make any kind of targeting as difficult as possible. Materiel would move regularly, and you'd be looking at bunkers, cave systems, and a whole range of options to make targeting that much more challenging."

The close air support mission is also likely to vex the allies. Kashin notes that North Korea has one of the largest armies in the world, numbering potentially into the millions. Pyongyang classifies around 100,000 to 200,000 as special forces troops, who are equipped with modern infantry weapons, as well as MANPADs. Dealing with these units will require a considerable amount of close air support.

In a recent speech to the UN, Donald Trump vowed to "totally destroy" North Korea if the USA is forced to defend itself. In its predictable riposte Pyongyang called him a barking dog. All agree that war is to be avoided, but should hostilities erupt, Kim Jong-Un would swiftly learn that allied airpower is a dog with bite.