ANALYSIS: How long does Delta’s Tokyo Narita hub have left?

Delta Air Lines is unravelling its hub at Tokyo Narita International airport, fulfilling the warning that it made earlier this year and continuing the process that began in 2010.

The Atlanta-based SkyTeam Alliance carrier will end service between Narita and both New York John F Kennedy and Osaka Kansai on 3 October, and Narita and Bangkok on 30 October, it announced on 10 August. It will also downgauge its Narita-Manila flights to a roughly 211-seat Boeing 767-300ER from a 376-seat Boeing 747-400.

The cuts follow previously disclosed plans to end Narita-Los Angeles flights in favour of ones between Tokyo Haneda and Los Angeles at the end of October. Delta also plans to replace its existing Narita-Minneapolis/St Paul route with a Haneda-Minneapolis flight when it receives final approval from the US Department of Transportation for the route.

Delta will only fly to five points in the USA – Atlanta, Detroit, Honolulu, Portland and Seattle Tacoma – and four in Asia – Manila, Shanghai Pudong, Singapore and Taipei – from Narita when these changes are made.

Service to leisure destinations Guam, Palau and Saipan, which have higher levels of origin and destination (O&D) traffic, from Narita have previously not been included by Delta in statements about connecting flows over the Tokyo airport.

The reductions this week are included in Delta’s plans to reduce Pacific capacity by 7.5% in the third quarter and a further 5% during the winter season, which runs from the end of October through March 2017, confirms a spokesperson.

Glen Hauenstein, president of Delta, said in July that the reductions are part of an effort to return the region to positive passenger unit revenue territory, something that could be achieved by the end of the year.

Delta warned in January that a gradual opening of Haneda would prompt the unravelling of its Narita hub. The comments, made by adviser and former chief legal officer Ben Hirst, were part of an effort to stymie the then-in-discussion agreement to open the close-in Tokyo airport to daytime flights from the US.

“Delta has closely analysed the frequency authorities the DOT tentatively awarded at Haneda in the context of the significant advantages our competitors and their joint venture partners enjoy,” says Vinay Dube, senior vice-president of Asia Pacific at the carrier, in a statement. “Given this, we had to make the difficult decision to cancel service from JFK to Tokyo Narita, and from NRT to Osaka and Bangkok to ensure Delta’s long-term success in this fast-growing region of the world.”

In his January presentation, Hirst said service to Bangkok, Los Angeles, New York JFK, Osaka and Shanghai Pudong from Narita would be the first to go if the Haneda opening moved forward – all of which have since been cancelled with the exception of Shanghai.

Service to Shanghai likely remains, for now, due to lack of available frequencies for US airlines to China’s largest cities of Beijing and Shanghai, capping service at existing levels.

Delta would likely have to submit a request to the DOT to change the routing of the frequencies it uses for the Narita-Shanghai flights and, in the process, could be forced to compete with other carriers through a new proceeding to keep them.

Next up on the chopping block at Narita is Portland, Oregon, in the USA and Manila, Singapore and Taipei in Asia, if Delta keeps to the strategy laid out by Hirst.

“All of that’s going to be a function of profit,” says Henry Harteveldt, a travel industry analyst and founder of the Atmosphere Research Group, calling Delta’s strategy “very pragmatic”.

“The only thing that’s nostalgic at Delta is the Delta Museum [and] that is the correct and prudent business decision not only for Delta but for any airline,” he says, referring to the airline, and its predecessor Northwest Airlines, historic legacy in Asia.

Delta’s future Narita operations would consist of service to just its Atlanta, Detroit and Seattle Tacoma hubs, as well as beach destinations Guam, Honolulu, Palau and Saipan, based on Hirst's prognosis.

“The growth of our direct flying to Asia, using Seattle as our principal hub that we're creating off of the West Coast, is affording us [opportunities]… Part of the strategy is to reduce the concentration in Japan,” said Ed Bastian, now chief executive of Delta, when he was the carrier’s president in October 2013.

FlightGlobal Schedules show Delta has shrunk its Narita hub, which it gained through its 2008 merger with Northwest, since 2010. 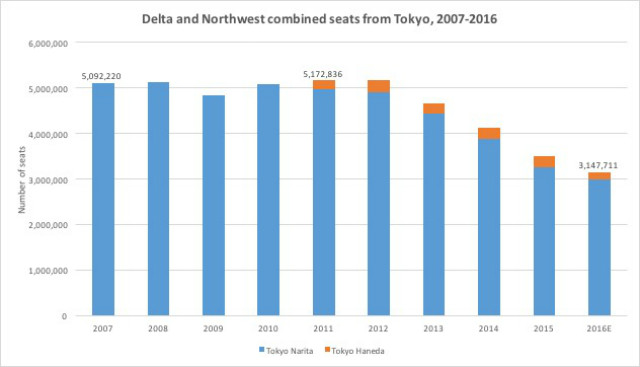 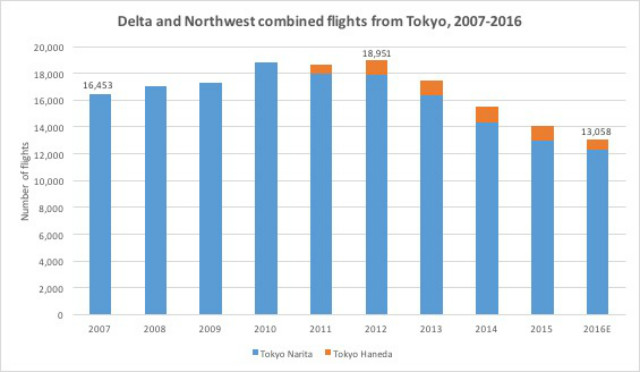 The decline in capacity is slightly less pronounced when Delta’s service to Tokyo Haneda is included, with seats down 38.1% and flights down 30.6% since 2010, schedules show.

Shrinking its Tokyo Narita hub, and the concentration of its Asia network in Japan, will undoubtedly boost Delta’s revenues from the region in the short term. This will help return the airline to its much-sought goal of positive unit revenue growth, something it has said it hopes to achieve by the end of the year.

However, it does not have good alternatives in place to get passengers to many of the cities it is discontinuing service to from Narita. Fliers will have to connect through SkyTeam partner hubs, including Seoul Incheon on Korean Air and Shanghai Pudong on China Eastern Airlines, to reach Bangkok or Osaka.

Neither option is ideal from a Delta passenger perspective.

Delta frequent fliers earn far fewer miles flying Korean Air than on other SkyTeam partners due to a cool relationship between the carriers, while many US corporate travellers continue to have concerns about the operational and service quality of China Eastern, says Harteveldt.

“Delta’s drawdowns at Narita undermines its utility as a transpacific airline,” he says, adding that some travellers may be inclined to fly American Airlines or United Airlines and their partners to these cities.

Delta is working to address the utility question. It has expanded nonstop service into Asia from both Los Angeles and Seattle Tacoma, replacing connections over Narita to Hong Kong and Seoul with nonstop flights from the latter city.

However, it has slowed the replacement of Narita connections with nonstops to Seattle Tacoma since 2014, when it launched its last new service to Asia from the Pacific Northwest gateway.

If the carrier continues its Narita reductions along the lines Hirst laid out, without new nonstop to the USA, Manila, Singapore and Taipei could be the next destinations to disappear from the Delta map.