ANALYSIS: LCCs ascending in the land of the Rising Sun

Despite a sometimes rocky path, Japan’s low-cost carriers are taking their place in the market, with strong growth prospects ahead.

Although smaller niche carriers such as Skymark, Air Do and Solaseed Air have existed alongside Japan Airlines and All Nippon Airways for some time, it was not until the arrival of Jetstar Japan, Peach, Spring Air Japan and the first incarnation of AirAsia Japan between 2012 and 2014 that the LCC revolution really kicked off.

Even then, many of the early carriers faced a tough road operationally, with additional scrutiny from the Japan Civil Aviation Bureau, which forced some carriers to rethink their rapid growth plans.

Other issues cropped up with some of the partnerships, most notably at AirAsia Japan which started out as a joint venture between ANA and Malaysian carrier AirAsia. After operating for just over a year, disagreements between the two partners led to the cancellation of the joint venture. It shut down in October 2013, but was reborn two months later as Vanilla Air, a wholly owned ANA subsidiary.

A new AirAsia Japan joint venture, based in Nagoya, is planning to launch operations this year, having secured an air operator’s certificate in 2015. It has, however, repeatedly missed its planned launch dates and the carrier did not respond to requests from FlightGlobal for its latest schedule.

Most of the newer LCCs chose Tokyo Narita as their main operating base. After initially accommodating them in the main terminals, the airport opened its dedicated LCC facility, Terminal 3, in April 2015. It is now home to Jetstar Japan, Vanilla and Spring Airlines Japan.

While Narita has fast train links to Tokyo, the airport is 60km (37 miles) from the city centre and some budget carriers have found access to be an issue for passengers. That has led to the development of new low-cost bus services and budget hotels closer to the airport that better suit budget travellers, and nowadays it appears to be proving its worth.

The outlier at the time was Peach, which was the first low-cost carrier to base itself at Kansai International airport in Osaka. That gave it a largely uncontested market in the budget segment, allowing it avoid the Narita dogfight. It has since grown into the Tokyo market, serving both Narita and, uniquely, Haneda. It has also earmarked Sendai, Sapporo and Okinawa for further development as hubs as it continues its expansion. The latter city in particular is seen as the launch pad for the brand into Southeast Asia.

Vanilla Air has also told FlightGlobal previously that it would also launch services from Okinawa into Southeast Asia. Now however, it expects Taipei to become a focus city for expansion into the wider market.

Although there has been a proliferation of players into the budget market, they all remain in the growth phase, and appear to be growing profitably.

Vanilla, Peach and Jetstar Japan have all declared profits in recent years, while the finances of Spring Airlines Japan have not been publicly disclosed.

There is broad agreement across the industry that there is much more growth to take place across the budget segment before any consolidation occurs.

“In Japan and in East Asian countries the LCCs are still very young; they are still in the primary phase,” JAL chairman Masaru Onishi told FlightGlobal in November.

Vanilla Air chief executive Katsuyu Goto agrees. “In North Asia the market share of LCCs is very low, about 10-12%. In the Japanese domestic market, it was only 10% last year. Still, there are opportunities for us to expand more,” he says.

Illustrating the infancy of the industry, FlightGlobal schedules data shows that, in 2016, the four budget carriers operated only 7.9% of the total seats in the domestic market.

The biggest player over that period was Jetstar Japan, with a 4.6% share, reflecting its late move into short-haul international routes. Vanilla and Peach commanded smaller shares, reflecting their focus on routes outside of Japan, while Spring Airlines’ small size gives it only a fractional share.

Unlike other parts of the world, there is little fear at JAL and ANA that the budget upstarts will become a major thorn in their sides.

“We don’t really look at this competition as a risk,” JAL’s Onishi said in the November interview. He notes that budget carriers are helping to grow the market overall, rather than posing a major threat.

Indeed, as a one-third owner of Jetstar Japan, JAL stands to gain more upside from the growth of the budget market. Along with co-shareholder Qantas, it co-ordinates network planning with the low-cost carrier, which is also involved in codesharing and interlining with other carriers, including American Airlines and Jin Air.

ANA’s interest in its Vanilla Air unit and 39% shareholding in Peach also gives it significant exposure to the growing market. Unlike JAL, however, ANA does not play an active role in co-ordinating the networks of the budget carriers, and those two airlines themselves do not co-ordinate with each other. However ANA's move to increase its stake in Peach to 67% in April could change that.

Thus far, the only attempt at interlining is Vanilla Air’s participation in the fledgling Value Alliance, which allows it to sell tickets on other carriers within the alliance, such as Scoot and Jeju Air. For now though, it says that is the extent of its co-operation, and it is not looking to create further synergies with the other member carriers.

The greatest success appears to have been in the Taiwanese market, now served by Vanilla, Peach and Jetstar Japan. FlightGlobal schedules data shows that Peach and Vanilla each operated 6.3% of seat capacity on routes between the two countries in February, just below JAL’s 7.7% share of capacity. Jetstar Japan was much smaller at 1.4%. 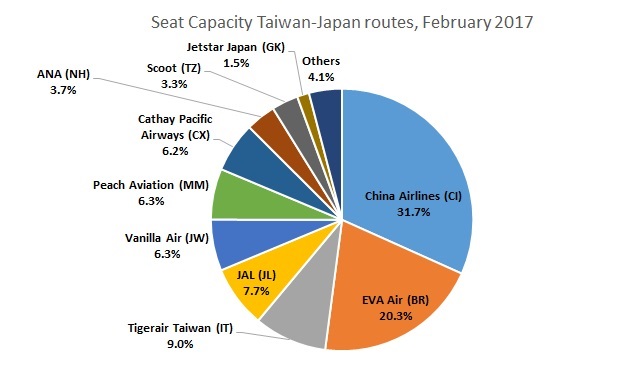 South Korea was initially a large focus market for the Japanese budget carriers, but they have largely been muscled out by Korean budget carriers Jeju Air, Jin Air, T’way Air and Eastar Jet. Peach maintains a 4.3% share of the market with daily services to Seoul Incheon from Osaka and Haneda. 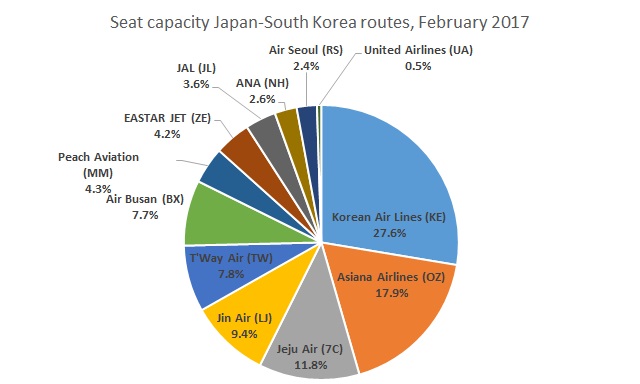 The much bigger prizes appear to be in the Chinese market. Despite political tensions, capacity between the two countries has been growing at an average rate of around a fifth since 2013. Although there has been some strong penetration of the market by Chinese low-cost carriers such as Spring Airlines, China United Airlines and West Air, the Japanese carriers have lagged somewhat.

Spring Japan, Peach and Jetstar Japan have thus far been the only carriers to have ventured into the massive China-Japan market. FlightGlobal schedules show that Spring Japan flies from Narita to Wuhan and Chongqing, while Peach started a back-of-the-clock operation on the Haneda-Shanghai Pudong route in February.

Jetstar Japan had planned to start a Narita-Shanghai service in January, but was forced to cancel the route after the Civil Aviation Authority of China blocked the airport from issuing new slots. Negotiations are ongoing, and the carrier hopes to start the route soon.

Peach and Vanilla have also made their first forays into the Southeast Asian market. Peach launched a daily Okinawa Naha-Bangkok Suvarnabhumi service on 19 February. That followed Vanilla’s launch of a Narita-Taipei-Ho Chi Minh City route in September 2016.

While not growing at the rapid pace of their southeast Asian counterparts, most of Japan’s budget carriers are still planning on further short- and medium-haul network growth based around their increasing numbers of narrowbody aircraft.

For now, most carriers look to have ruled out expanding into the long-haul arena, despite the encroachment of Scoot and AirAsia X into the Japanese market. The latter could pose a threat to JAL and ANA with its Osaka-Honolulu services, potentially pushing one of the local LCCs on to the route.

There have been some indications that LLCs are looking at long-haul services. In 2016, Vanilla Air revealed that it had evaluated adding widebody aircraft to its fleet, but passed on the idea. Nonetheless, it was warm to the idea of potentially taking A321neoLRs into its fleet to allow it to fly further and connect with more markets outside of Japan.

Despite there being a relative proliferation of LCCs in the country, given that most are still in growth mode there is little prospect of consolidation in the short-term.

JAL’s Onishi says the carriers all have growth potential, but in the longer term there will “probably be some natural selection”.

For now though, the emergent LCCs are enjoying their ascendancy in the land of the rising sun.