Sweden is changing. After a lengthy period of shrinking investment in its armed forces and a tactical shift from national defence to developing expeditionary capabilities, Stockholm's focus has reverted to protecting its population against invasion.

The potential threat from Russia is evident in the roughly 400 quick reaction alert (QRA) sorties flown by the Swedish air force's Saab Gripens in each of the last three years. Moscow's fighters and bombers are routinely seen in international airspace over the Baltic Sea, and future additions to that nation's capabilities – such as the Sukhoi T-50 fighter and S-400 long-range surface-to-air-missile system – are of major concern.

Russia's increased posturing under President Vladimir Putin, and its annexation of the Crimea region in Ukraine, have prompted Stockholm to bolster its defences and preparedness. A near airspace incursion in April 2013 drove politicians to increase defence spending, reactivate infrastructure and establish a permanent army presence on the island of Gotland – located off the nation's east coast – and boost fighter readiness. That incident saw a Tupolev Tu-22M3 strategic bomber and four escorting Sukhoi Su-27 fighters head directly towards Stockholm, before changing course just before entering Swedish airspace.

A subsequent initiative to fully activate all six of the Swedish air force's Gripen squadrons has now been completed, enabling the units – assigned to its F7, F17 and F21 wings – to all participate in QRA tasks.

Sweden's intelligence, surveillance and reconnaissance assets are also in daily demand under the return to Cold War-style levels of air-defence activity. This involves its two electronic intelligence-gathering Gulfstream GIVs and a pair of Saab 340-based airborne early warning and control system platforms. 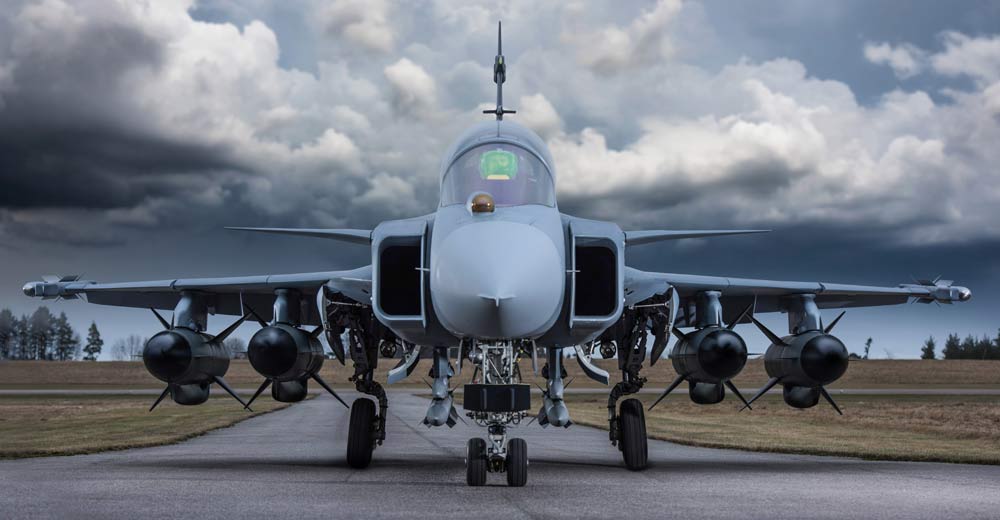 Meanwhile, the nation's ongoing investment in the Gripen C/D's MS20 operating standard has boosted the type's combat credentials, and ensured that it can remain relevant until the new E-model version of the fighter enters frontline use from early next decade.

Sweden's fighters are the first to carry Meteor in service, and Col Magnus Liljegren, head of the air force's training and development department, describes the weapon's addition as being a "game-changer". "It's not just extended range from [Raytheon's AIM-120] AMRAAM – it's something totally different," he notes.

"It is a longer-range weapon, with some really good performance in it," says Maj Johan Jeppsson, director of operations at the Swedish air force's Gripen operational test and evaluation unit (OT&E) at Malmen air base. This is continuing to work with operational squadrons to define the tactics, techniques and procedures for operating with the ramjet-powered weapon. "We have some new tactics," he says. "And a pretty good edge in air-to-air combat."

Gripens flying QRA missions do not carry AMRAAM or Meteor weapons, and Liljegren notes that not all scrambles are launched in response to Russian aircraft, with civilian traffic and military types from other nations also being intercepted or escorted. "It's very interesting for a lot of countries to be here," he says of the Baltic Sea region, where the current situation is "very tense".

Increased Russian activity over the last five years also has driven Sweden's investment in the Gripen E, at least 60 of which will be acquired. With a more powerful engine, increased range, greater weapons-carrying capacity and better electronic warfare capabilities than its predecessor, the new type is due to make its flight debut before the end of June. A first squadron is scheduled to achieve initial operational capability in the air-to-air mission area in 2023.

Another sign of the return to Cold War-style operations is a political decision to prioritise the air force's NH Industries NH90 helicopters to the anti-submarine warfare role. This follows a high-profile incident in October 2014, during which a Russian submarine is claimed to have entered the Stockholm archipelago.

The NH90 has had a troubled introduction in Sweden, which completed a rapid acquisition of Sikorsky UH-60M Black Hawks to support its personnel transport needs in Afghanistan in the face of delays to the European project. The Swedish Armed Forces Helicopter Wing has so far received four of an eventual 18 NH90s, with a fifth to arrive later this year. The type recently took part in an anti-submarine warfare exercise, but still requires a torpedo to be selected and integrated and a datalink installed to enable it to perform such duties in anger.

"It's a very tricky path we are moving on at the moment," Liljegren says of the NH90. "We are trying to prioritise the maritime capability, but with the funding constraints it's hard to get what we need to have."

The service has, however, received funding to enhance its emergency air base infrastructure to support dispersed tactics, and its training involves preparing for operations under degraded conditions and in contested airspace. This includes operating from forest war bases, with disrupted communications and radar coverage, or a loss of GPS access.

Meanwhile, the air force is to be reorganised, with the aim of rationalising two departments, and personnel are likely to move from Stockholm to Uppsala. But in addition to their fiscal challenges, the Swedish armed forces also face a major challenge in recruiting and retaining personnel. As a result, Stockholm is looking to reintroduce conscription, initially for around 4,000 posts per year.

The Gripen E acquisition is Sweden's main near-term air force investment, but the nation's budget is under intense pressure, with other big-ticket activities including Saab's development of the A26-class submarine for its navy.

A looming procurement bow-wave is approaching for the air force, with several of its other current assets nearing the end of their lengthy service lives. The list includes replacing its roughly 50-year-old Saab 105 (SK60) jet trainers, modernising or retiring its Lockheed Martin C-130H tactical transports and lone tanker, and potentially increasing the size of its Gripen E purchase. Also on its shopping list are an air-launched cruise missile, plus Saab RBS15F ER anti-ship missiles, recently ordered for integration with its future fighters.

While the Gripen E will be more capable than the current C/D model, a numerical drop from 96 to 60 aircraft does not tally with the air force's planning. It expects the new fleet deal to be increased to 70 aircraft, versus an original requirement for 80. The service is also exploring whether some of its current assets – the youngest of which were delivered only two years ago – could fly on.

Currently, funding for operating the Gripen C/D will end in the middle of the next decade, and MS20 is the last planned software update for the legacy model.

"We have no money [for the C/D] after 2026," Liljegren says, while adding that no decision has been taken to halt flying the type at that point, by when its 60 Gripen Es should have been delivered.

Replacing its operational fleet of around 40 SK60 trainers has been delayed while Sweden watches the US Air Force's T-X competition; a winner for which is likely to be announced early in 2018. Its Saab 105 airframes must now fly on until 2025.

Liljegren says the service could consider the Boeing/Saab T-X design if it is selected by the USAF, but that other candidates – the Leonardo DRS T-100 and Lockheed/Korea Aerospace Industries T-50 – would not "make sense" in Swedish service. Other types which could appeal to Stockholm include the turboprop-powered Pilatus PC-21.

The service's six C-130Hs – aged between 36 and 48 years – appear to be heading for an avionics modernisation activity, although a planned mid-life update would not include a centre wingbox replacement. A yet-to-be-selected company would perform modifications between 2020 and 2024, but Liljegren says the service must determine whether the Hercules' remaining life justifies such an investment. "They will not fly any further than 2030 to 2032, so the question is still there if it is worth it or not."

Alternatively, Stockholm could look to strengthen its relationship with Gripen E customer Brazil by considering Embraer's KC-390 twinjet. "It's a question of money, and as at now it’s not on the table," Liljegren says.

The service's Erieye radar-equipped Saab 340s also require upgrading, he says. "One asset that we really need to discuss further and to have money to keep it alive is the ASC 890. Every day we need it more and more, and they are working very hard with the two aircraft that they have: more or less on a 24/7 basis."

However, replacing the pair with Saab's in-development GlobalEye system – housed on a Bombardier Global 6000 business jet – would appear to be beyond Sweden's requirements and available budget. But Liljegren points to a possible solution: "Could we buy two or three GlobalEyes, and operate them with Finland?" The neighbours already allow each others' military aircraft to routinely access their airspace, and Stockholm would let Helsinki pull its assets back to Swedish bases were it to face invasion. Saab also is offering its

Gripen E as a candidate for the Finnish air force's HX fighter contest, which is seeking a replacement for its Boeing F-18C/Ds.

Clarity over the available budget levels should emerge when the Swedish government publishes its next parliamentary commission report in 2020, outlining its military priorities for the following years.

"We foresee that it will be a positive one when it comes to the importance of the armed forces, and underlining that we need some more resources in order to cope with what we are looking to do," Liljegren says.

"The challenge for a small, non-allied air force is that you cannot afford to say 'we're not having that': we need all of the capabilities. It forces us to work in a very clever way," he notes.

"At the political level it's very clear what we need to have. They need to follow up with money – or tell us that this is important, and you have to decrease or get rid of some other capabilities within the armed forces."

On 24 September, a hostile force will mount an assault on the strategically-important island of Gotland, prompting a massive response from Swedish armed forces to repel the aggression.

The activity will not be an act of war, but the critical phase of Aurora 2017: Stockholm's biggest military exercise in more than two decades.

Almost 22,000 personnel will take part in the large-scale manoeuvres from 11-29 September, including almost 20,000 from the Swedish military and home guard. Other participants are expected to include contributions from Denmark, Estonia, Finland, France, Lithuania, Norway, and the USA, which will contribute assets including Boeing AH-64 Apache attack helicopters and a pair of navy destroyers. Simulated offensive air activity will largely be performed by the Finnish air force.

When Sweden last held an exercise on this scale in 1993, around 23,000 of its personnel took part; from a total mobilised force of 800,000. This time, its activity will involve roughly 50% of the nation's total military manpower, while 40 civilian agencies will also be providing support, notes the exercise's director, Royal Swedish Marine Maj Gen Bengt Andersson.

"The security situation in the region has worsened in the recent years, and Sweden's operational capabilities shall be increased," Andersson says. Aurora "will send an important message to the outside world that we are prepared to defend Sweden against outside aggression," he adds. "In the 1990s, we had a well-developed national defence in Sweden – we are beginning to regain those capabilities."

A nearer term show of strength will occur between 22 May and 2 June, with the Arctic Challenge Exercise (ACE) manoeuvres to involve around 100 aircraft, including fighters, transports, tankers, airborne early warning assets and search and rescue helicopters, plus ground-based air-defence systems.

Around 1,000 personnel will be involved in the activity, with Finland acting as lead nation. In what will be the third ACE-series exercise staged since 2013, it will be conducted from Rovaniemi air base in Finland,Bodø in Norway and Luleå in Sweden.

Up to 90 aircraft will be airborne simultaneously during the "Red Flag-type" exercise, with other participants including Belgium, Canada, France, Germany, the Netherlands, Spain, Switzerland, the UK and the USA.