ANALYSIS: The influence of engines on aircraft values

There is an old rule-of-thumb in the commercial aircraft industry, which says that on delivery a new aircraft has 20% of its value tied up in its engines and 80% in the rest but at end-of-life the ratio flips over and 80% of the value is in the engines. However, we at Flight Ascend Consultancy consider this notion to be highly outdated and no longer applicable as spare-engine values and engine maintenance costs have grown at rates significantly above inflation as measured by the consumer price index for urban consumers (CPI-U).

Engine values in this analysis refer to spare-engine values – which closely follow list prices for in-production engines, whereas installed engines (delivered on a new aircraft) are generally discounted by 40% or more during the purchase negotiation process.

To begin with, we decided to look at engine overhaul (shop visit/SV) and life-limited part (LLP) costs indexed against the CPI-U, indexed back to 2000 for the CFM56-7B26. The chart below shows how over a 17-year period, SV costs and LLP costs have drastically exceeded the CPI-U index. 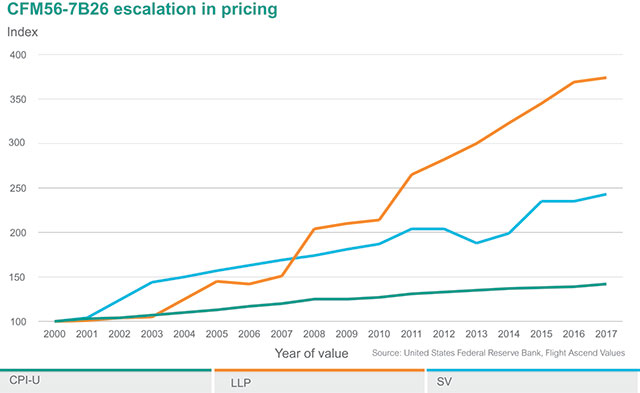 While engine OEMs often sell installed engines on a new aircraft at a heavy discount, arguably making a loss in many cases, they then try to recoup these losses, along with the cost of developing the engine, through long-term service agreements and through the sales of spare parts and spare engines. By escalating LLP part prices and other material costs (which account for around 80% of a typical engine shop visit invoice), they attempt to reduce the time it takes to make their money back. It does not help their cause that engines are getting more reliable and spending more hours on wing, needing fewer shop visits – which drives them to charge even more when the engine finally does go into the shop.

We also decided to look at a twin-aisle aircraft engine and one from a previous technological generation. The PW4056 follows a similar trend of escalation to that of the CFM56-7B26 between the years of 2001 and 2012, before rapidly dropping off in 2013. This is the result of an increase in aircraft part-outs (in this case the main aircraft host platform – the 747 – produces four engines per aircraft retired). With additional engines available, the market switched to burning green time and not performing as many overhauls. LLP prices were also reduced amid the growing supply of material made available from engine teardowns. 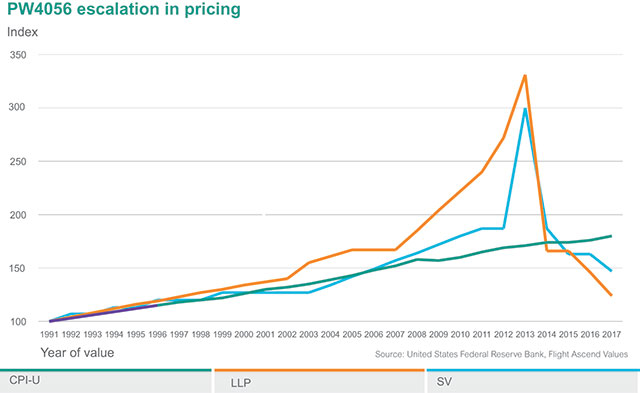 As appraisers, we sometimes have a lag in receiving real-market shop-visit and LLP cost data, so the curve’s drop-off may have been a little smoother in reality than the rapid drop-off illustrated. Nevertheless, the obvious takeaway is the same: once the engine enters the retirement phase, most of the gains in maintenance cost and value achieved during its production life are wiped out.

This then leads us to ask: how have spare engine values behaved as a percentage of aircraft values over time? We looked at the A320 and 737-800 first and plotted this relationship and how it evolved over time in the chart below. 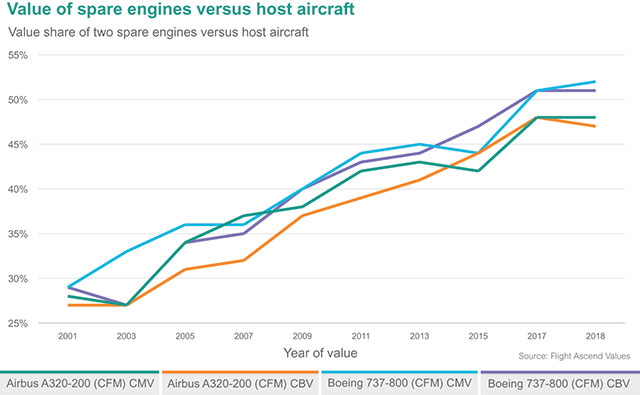 As expected, the current market value (CMV) curves oscillate around the smoother current base value (CBV) curves, reflecting periods of market strength and weakness. Spare engines are a “derived demand” in that their greatest value derives from the ability to power an aircraft. Periods of strength or weakness in the spare engine marketplace may not necessarily align with the same market conditions in the aircraft market. In fact, the engine cycle tends to lag the aircraft cycle by a number of months or even years.

By using such a high rate of escalation, engine OEMs can harm themselves in the long run. A rising cost of maintenance implies rising engine values as a portion of the overall aircraft value. In turn, this can lead to earlier aircraft retirement aimed at extracting the value in the engines (lessors in particular would be incentivised to do this sooner). If part-outs start occurring earlier, they threaten OEM aftermarket revenue, as supply of used serviceable engines and parts grows. Secondly, if the engine has a shorter life span then the OEM is drawing less revenue from any long-term service agreements they may have.

We also plotted the same chart for two popular twin-aisles and a couple of their engines: the 777-200ER (Pratt & Whitney-powered) and the A330-300 (Rolls-Royce-powered). 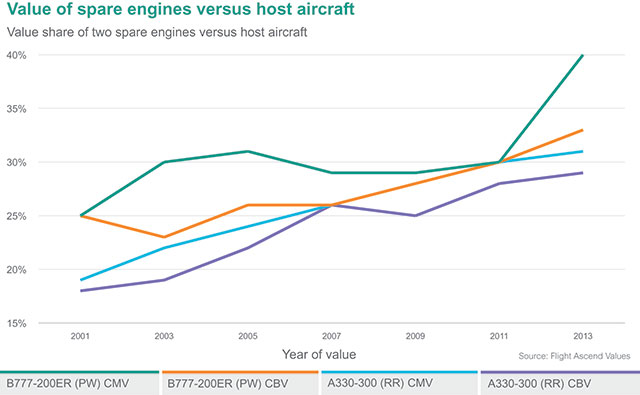 Bear in mind that this chart is only plotting engine values as a percentage of a new aircraft (which is why the curve ends in 2013 when 777-200ER production stopped – although the A330 continues). In comparison with single-aisle aircraft, the value of spare engines starts at a lower percentage of new aircraft value and has what appears to be a lower rate of escalation, but this may not necessarily be the case. The spike in the percentage for the 777-200ER CMV in 2013 is caused by end-of-line discounting of the aircraft as it exits production, yet the associated engines do not show such a drop in value in the same timeframe as the aircraft ending production. What happened after 2013 was that aircraft and engine values both started dropping (rather sharply, especially for the 777), reflecting a smaller fleet compared with single-aisles and the further dilution of this small fleet into three engine suppliers.

So where does the next generation of aircraft stand as they are being delivered today? To complete the analysis we look at their ratios of engine value as percentage of full-life CMV and CBV on delivery.

The table makes it clear that the trend for both single- and twin-aisle aircraft continues, with the A320neo and 737 Max entering service with between 52% and 57% of their value contained in their engines. If this is the starting point, then how many years will it be before the engines dominate the value and part-out seems lucrative? Projecting forward, a 10-year-old CFM International Leap-powered A320neo or 737 Max 8 has 90% of its value contained in its engines, while a P&W-powered A320neo has 80%!

Spare engines on twin-aisles remain below 40% of value, perhaps a sign that aircraft manufacturers are still able to command a significant premium for long-haul aircraft.

With new aircraft pricing increasing at a rate below the CPI-U or in many cases remaining stagnant, engine costs cannot continue to escalate at the rates we have seen. Logically, they should plateau or slow their escalation sometime soon – although exactly when this may happen is anyone’s guess. With two spare engines already accounting for over 50% of the value of their parent aircraft on delivery, continued escalation could lead to shorter economic lives, as operators and lessors may be drawn to part out their aircraft at a younger age. This is particularly true for the A320neo and 737 Max where in full-life condition the engines are predicted to be worth around 90% of the total aircraft value at only 10 years of age. We continue to observe engine escalation trends as the market hopefully balances itself into a more rational position.