There has been much excitement over promises from retailers and social media companies over recent years to develop unmanned air vehicle (UAV) concepts that could deliver everyday goods. So far, however, these have not amounted to much, although the idea of an unmanned system being used for delivery is still evolving in other ways.

Operators and UAV developers in both the commercial and military domains have recognised that a system that can carry a sufficient payload would be appealing for the cargo market, and a number of efforts have emerged that are evolving these concepts into fully fledged development programmes.

At one end of the scale are developments such as the optionally manned Hybrid Air Vehicles Airlander airship, which promises to carry a 10t or 50t payload depending on configuration. Two accidents in testing have delayed the programme, but the company says it is ready to build a production model.

There are also, however, smaller-scale, yet significant developments being made elsewhere, including from Boeing’s HorizonX venture capital arm that funds disruptive technologies. In 2018, HorizonX revealed the prototype for its cargo air vehicle (CAV) with a 230kg (500lb) payload capacity. The electric-powered CAV is a technology demonstrator that will serve to establish the technologies required for this type of concept, and now falls under Boeing’s NeXt organisation, formed alongside artificial intelligence developer SparkCognition – one of the companies previously funded under HorizonX – in 2018.

“The safe integration of unmanned aerial systems is vital to unlocking their full potential. Boeing has an unmatched track record, regulatory know-how and systematic approach to deliver solutions that will shape the future of autonomous flight.”

Airbus is also working on a cargo-carrying project, and in February 2019 announced that a UAV developed with the Civil Aviation Authority of Singapore (CAAS) had carried out its first flight demonstration. The Skyways project was established in February 2016 and then extended in April 2017 when Singapore Post (SingPost) joined the initiative to provide logistics in the country. Also involved is the National University of Singapore (NUS), where the flight testing is taking place.

For its test flight, the demonstrator took off from a dedicated maintenance centre and landed on a roof, where it picked up a package from a parcel station using a robotic arm and then returned to land. Alain Flourens, Airbus Helicopters’ executive vice-president of engineering and chief technical officer, described the flight demonstration as paving the way to a local trial service launch “in the coming months”.

Flourens adds: “It is the result of a very strong partnership among the stakeholders involved, especially the close guidance and confidence from the CAAS. Safe and reliable urban air delivery is a reality not too distant into the future, and Airbus is certainly excited to be a forerunner in this endeavour.”

Airbus says it is at an “advanced stage” of the project, and equipment and facilities have been installed at the NUS campus, with more testing under way ahead of a planned roll-out of a long-term trial at the university that will start this year and enable students to deliver and receive small parcels within the university. These will weigh between 2kg and 4kg and will be delivered to designated parcel stations across a campus that Airbus says is the equivalent of 150 football fields in size.

“The urban logistics challenge is complex and an ecosystem of parcel lockers and autonomous vehicles will be a key piece to solving this puzzle,” SingPost Group’s chief digital and technology officer, Alex Tan, says. “The trial service that is taking off later this year will be an important step forward for SingPost in our efforts to develop solutions for the future logistics needs of Singapore and other cities of the world.” 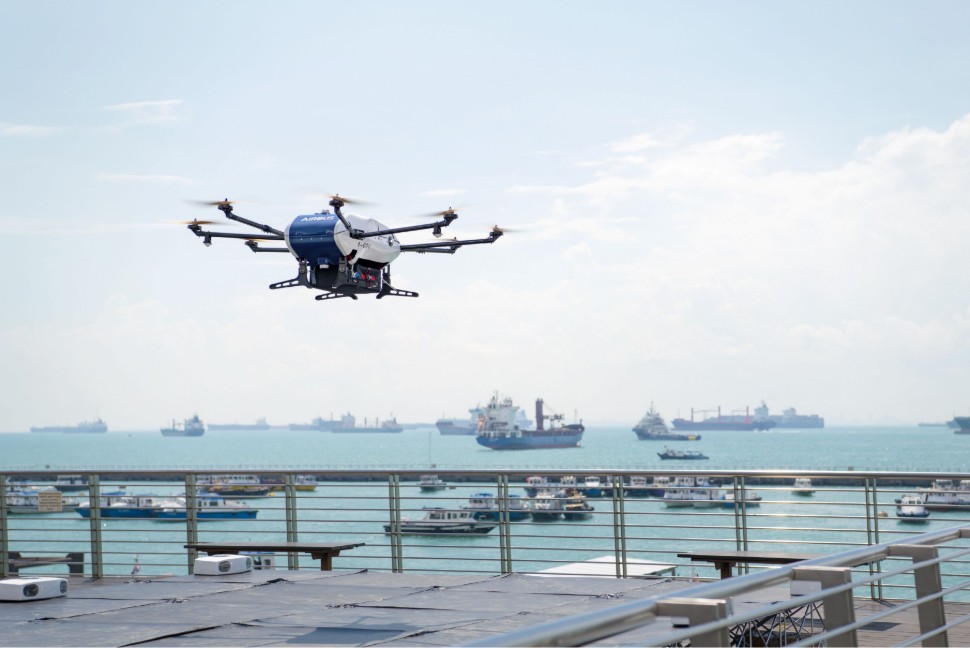 Airbus is taking another tack with Skyways, having begun trials in March this year of parcel delivery between ships and shore. Starting with a 1.5kg package of “3D printed consumables”, a Skyways drone took off from Singapore’s Marina South Pier, landed on the deck of the Pacific Centurion anchor handling tug supply vessel to leave its cargo with the ship’s master, and returned to base in a 10min mission described by Airbus as a first in “real port conditions”. Later trials will handle up to 4kg of cargo and travel along predetermined “aerial corridors” to vessels as far as 1.6nm (3km) from shore.

Marius Johansen, vice-president commercial of Wilhelmsen Ships Service, which is partnering with Airbus in these trials, praised the “now proven, seamless operation of drone deliveries from shore to ship in one of the world’s busiest ports”. He added that delivery of essential spares, medical supplies and cash by launch boats is one of Wilhelmsen’s normal services: “Modern technology such as the unmanned aircraft systems are just a new tool, albeit a very cool one.”

However, Airbus reckons UAV use in the maritime industry could enlarge the services portfolio of ship servicing agencies and “speed deliveries by up to six times, lowering delivery costs by up to 90%, reducing carbon footprint and significantly mitigating risks of accidents associated with launch boat deliveries”.

Meanwhile, Tactical Robotics – a subsidiary of Israeli unmanned systems house Urban Aeronautics – announced in March that it had teamed with crop protection company Adama to develop an agricultural version of its Cormorant cargo-carrying UAV (formerly know as AirMule) to be used for crop spraying. The aircraft is designed to carry payloads of up to 500kg, excluding fuel.

“The Ag-Cormorant’s unmanned operation and unique design promote a new standard of safety in aerial spraying,” the companies say. “It eliminates the risks of pilot injuries and exposed rotor accidents. With a relatively low acoustic signature and 24/7 flying capabilities it will significantly increase the available window for application.”

They add that the UAV’s ability to adjust flight height and speed according to the mission, as well as its aerodynamic properties, provide “better canopy penetration, drift reduction and variable-rate application capabilities”. 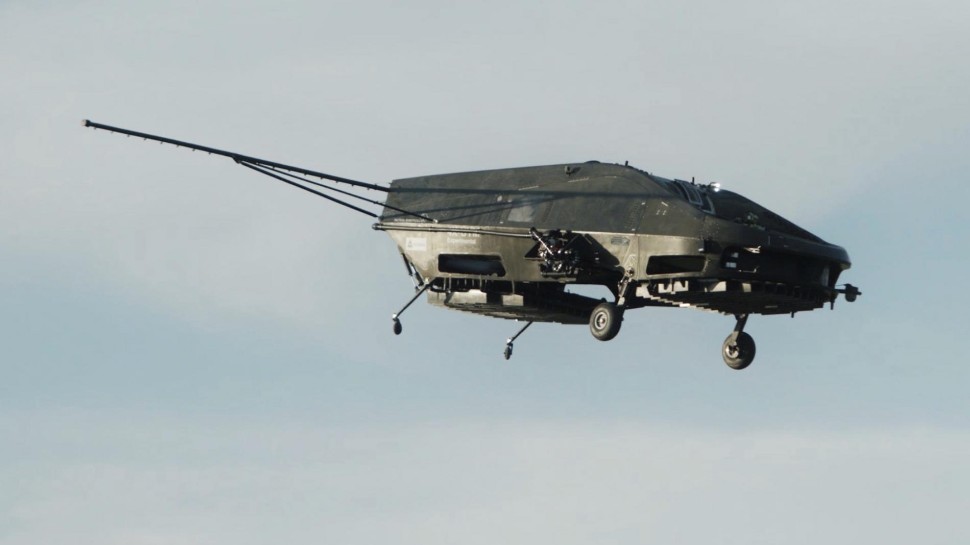 Malloy Aeronautics, meanwhile, is developing new cargo-carrying concepts from its Berkshire facility in the UK. These are being tested under various initiatives by UK and US armed forces. Building on its experience developing the Hoverbike, the company’s tactical resupply vehicle (TRV) UAVs will be able to carry some 180kg in the largest form, the TRV400. Smaller variants – the TRV50 and TRV80 – will be able to carry 23kg or 36kg, respectively.

The TRV80 has a pick-up-and-drop mechanism and is being tested for phase 2 of the British Army’s autonomous last mile resupply programme. This initiative is testing airborne and ground-based technologies that could be used to deliver supplies to troops, with five teams competing in the current phase, expected to conclude with demonstrations to the army in the coming months. Phase one assessed technologies at technology readiness level (TRL) 1-2, phase two is exploring up to TRL 4-6, while phase three is expected to take the technologies up to TRL 9.

Malloy Aeronautics chief executive Oriol Badia explains that while the current work is focused on army programmes, there is potentially a civil market for the platforms as well. “It is a really appealing business case,” he says. “We can provide a versatile and flexible platform on which other people can build their own capabilities.” 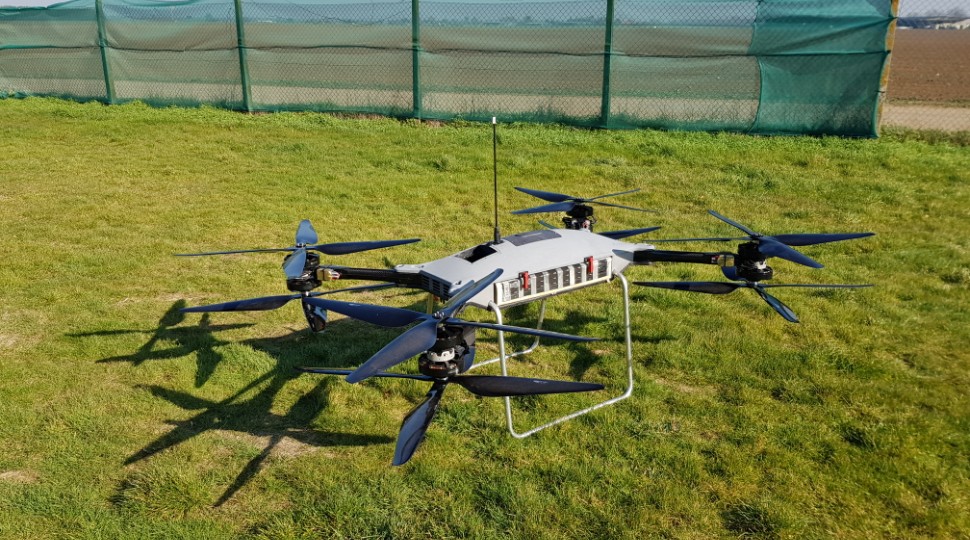