Bidders ready to power up for German electronic-warfare contest

With Germany still mulling the precise requirements for an electronic warfare-roled Eurofighter to succeed the Panavia Tornado ECR, system providers were out in force at the ILA Berlin show to highlight potential solutions.

However, despite the clear need for such a programme – and the display of a full-scale mock-up at the show – officials stopped short of a formal launch for the Elektronischer Kampf (EK) variant of the multirole type. 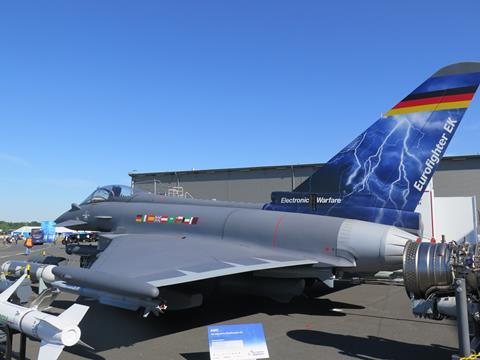 According to current timelines, initial operational capability for the Eurofighter EK is scheduled for 2028 as part of a revised commitment to NATO, and just two years before the Tornado fleet is due to retire. As such, procurement activities are due to begin in 2023.

Hensoldt – now 25% owned by Leonardo – says it is likely to offer its Kalætron Attack jamming pod for the requirement.

In development since 2017, Hensoldt says it has “now reached the point where we will be able, if selected, to configure the core elements according to the needs of the whole system”.

Laboratory and ground testing of the system have been completed, and flight tests will follow later this summer or in the early autumn, likely aboard a Learjet flying testbed.

“We are at a relatively mature state of development. This doesn’t mean we are ready but we are ready to take up whatever requirements might be formulated by the Luftwaffe,” it says.

Hensoldt says without knowing the precise customer requirements it is too early to say where the pod would be located on the aircraft’s fuselage. However, based on the likely power and range of the system, a centerline location is probable. 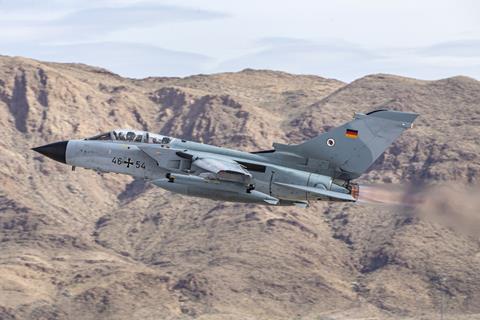 Rome-headquartered Elettronica is also considering its approach to the requirement, which it could potentially address through its German subsidiary.

“We are ready to transfer to Elettronica Gmbh the necessary capabilities in order to sustain the programme in Germany,” says Paolo Izzo, chief sales officer.

Its Edge jamming pod could be one solution, but Izzo notes that it has previously integrated an EW system into a modified fuel tank for an undisclosed customer “which shows that we can equip any pod shell for electronic warfare”.

ESG, meanwhile, has teamed with Elbit Systems unit Elisra to offer the TEASE² pod. It says the “combat-proven” system could be located on the centerline, wing stores, or even on the wingtips in place of the existing defensive aids subsystem equipment.

Berlin had previously planned to acquire Boeing EA-18G Growlers for the Tornado ECR replacement alongside 30 nuclear weapon-capable F/A-18E/Fs. However, when in March the Super Hornet acquisition was ditched in favour of the Lockheed Martin F-35, the defence ministry said it would also purchase 15 Eurofighters for the EW mission.

Meanwhile, the Eurofighter consortium continues to evaluate the future development roadmap for the type under the Long Term Evolution (LTE) programme. Discussions are ongoing between the four partner nations and industry, regarding how to proceed with the required enhancement packages, says Carlo Mancusi, chief executive of Eurofighter.

While the intention is to “keep the programme as stable and unified as possible”, there should also be sufficient flexibility to “accommodate different products… to be customised to the specific needs of the customer”.