Russia is giving an international debut to its Sukhoi Su-75 Checkmate, with a full-scale model of the next-generation fighter being exhibited at the Dubai air show.

Military delegations were invited to visit the invitation-only Checkmate pavilion on 14 November, with a media unveiling to take place as the event’s opening day draws to a close. 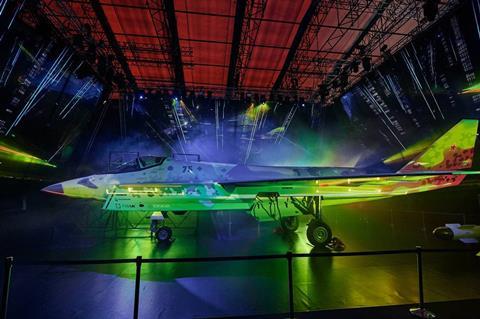 United Aircraft (UAC) revealed the stealthy Su-75 at the MAKS air show in Moscow on 20 July, outlining a programme schedule including first flight in 2023 and deliveries from 2026. It estimated the platform’s unit cost as in the $20-30 million range.

“It is not a coincidence that the first international presentation of the new fifth-generation fighter is taking place here,” says Sergey Chemezov, head of UAC parent company Rostec. “People in the Middle East appreciate the reputation of Russian weapons, show great interest in our advanced products and seek the development of partnership with Russia.

“The Checkmate combines low visibility and excellent equipment, and is ideal in terms of combat effectiveness and flight-hour cost. All these factors make the aircraft a unique offer in the international arms market,” Chemezov adds.

While it is too early to know if Moscow will enjoy the sweet smell of success with its low-cost rival to the Lockheed Martin F-35, Rostec also has taken the unusual step of launching a Checkmate fragrance at the show.

“Checkmate is a fifth-generation fragrance, for masters of the game,” says a promotional video posted online.