The exercise was done in support of the service’s Agile Combat Employment concept of operations, a USAF strategy to avoid having aircraft destroyed on the ground by quickly and continuously moving them between dispersed airfields. The training is an indication that the service aims to make the practice a routine part of operations for the UAV. 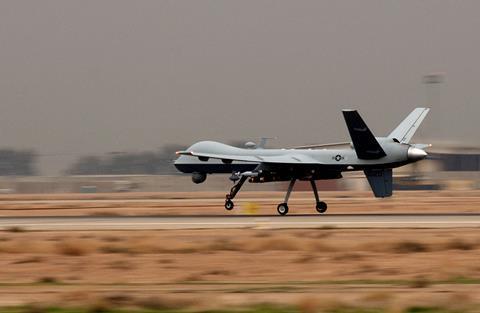 “Hot-pit refuelling, or rapid refuelling as we called it, is the act of refuelling the MQ-9 while power is still applied to the aircraft,” says Major Adam Smith. “The intent is to minimise the time between landing and turning the aircraft for a relaunch.”

Because Agile Combat Employment would stretch personnel across many airfields the USAF is trying to figure out how to use bare bone crews to refuel and reload munitions on aircraft. It is practising similar concepts of operations with other combat aircraft, including the Lockheed Martin F-35 and F-22 stealth fighters.

Ground crews must be tightly coordinated and well-practiced to make hot refuelling work with the MQ-9A, says Smith.

“Communication is paramount when conducting rapid refuel,” he says. “There are a lot of moving pieces and communication is essential to ensure everyone is on the same page. From aircrew running checklists to maintainers prepping the aircraft to coordination with the fuel trucks and the airfield, everyone has to understand their role and the intent.”

The MQ-9A is a slow-moving, propeller-driven aircraft that was designed for armed reconnaissance against technologically unsophisticated insurgents and terrorists. The USAF is trying to find new uses for its fleet, despite the perception that the UAV is vulnerable to surface-to-air missiles and advanced fighters fielded by countries such as Russia and China. The service expects to keep the MQ-9A in service until 2044.

The MQ-9A Reaper can fly for up to 29h and the USAF is looking to make use of that extended hang time, including using the UAV for ballistic missile spotting or as a platform for long-range sensors.