NATO is working to coordinate the lower tier air defences of its members against hard-to-spot and difficult to shoot down small unmanned air vehicles (UAVs).

The alliance organised an exercise from 2-12 November in Vredepeel, the Netherlands, to test ways allied nations can work together to defend against small, exploding drones, it said on 11 November. 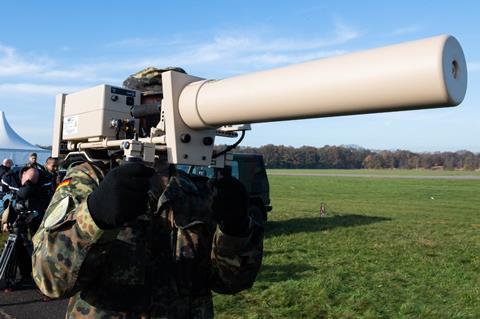 There are many ways to down a UAV, but coordinating defences is essential

Small UAVs – sometimes hobby drones armed with improvised explosives – are increasingly being used by combatants in the Middle East and Ukraine. The drones are cheap, but hard to detect and shoot down because of their small size, quiet electric motors and low-altitude flight.

“Malicious actors have made use of low-cost hobby drones in recent years, creating a potential security threat to allies,” says Cristian Coman, lead for counter-drone activities with the NATO Communications and Information Agency. “The misuse of small drones represents a significant and growing risk to operations and day-to-day defence activities for NATO and nations.”

Russia has been accused of using quadcopter drones against Ukraine, for example, to coordinate artillery strikes and in one case drop a thermite grenade on an ammunition depot, which melted through the facility’s roof and caused a massive explosion. The Islamic State of Iraq and the Levant has allegedly used small quadcopters to try to drop grenades on its enemies in Syria and Iraq. Iran has allegedly used small explosive-laden drones to attack Saudi Arabian oil facilities.

There are a variety of ways to down small UAVs, including using radio control jamming, microwave weapons, lasers, automatic guns and small missiles. Because there is a wide variety of drones to defend against, militaries increasingly are opting for an all-of-the-above approach, which offers guarantees they will have the right weapon available during an attack and creates a layered defence. 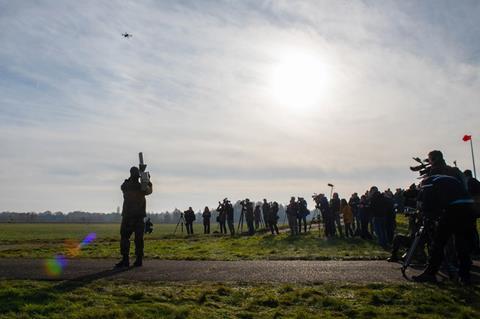 Small UAVs are difficult to detect and down

However, coordinating many systems across NATO’s 30 member states is difficult. As part of recent exercises, more than 20 companies tested about 70 different systems in order to increase technical interoperability standards, says NATO.

The NATO Communications and Information Agency also brought a prototype it had developed in-house called the ARTEMIS system to the exercises. The system uses machine learning algorithms to detect and classify drones based on their radio frequency signals. It can also determine the direction of a UAV and locate the person controlling the drone.

Detecting incoming drones is the first step in coordinating a defence. As such, the ARTEMIS system “is an essential tool to help the agency understand the technology being used in the market and to identify areas where NATO would benefit from developing standards around counter-[UAV] systems,” says Major General Goksel Sevindik, chief of staff at the NATO Communications and Information Agency.