Raytheon’s Coyote Block 2, an exploding drone intended to down other unmanned air vehicles (UAVs), wrapped up a 10-day test period at the US Army’s Yuma Proving Ground in Arizona in August.

The interceptor proved effective at destroying group one-, two- and three-sized UAVs, which range between 9.1kg (20lb) and 599kg. The UAV is headed toward an initial operating capability declaration and deployment overseas by the service soon, Abel Ghanooni, Raytheon’s senior director for short-range air defence and rapid development programmes, said on 11 October. 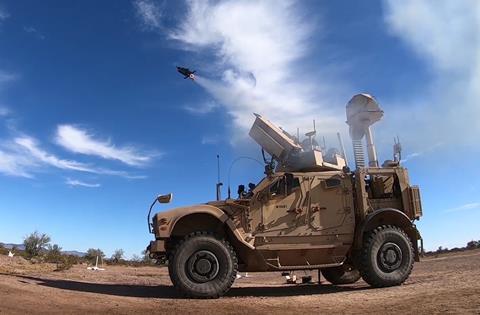 The Coyote Block 2 is intended as a defensive weapon

Coyote Block 2 is a jet-powered UAV that uses rocket boosters to launch from a rail. Guided by Raytheon’s Ku-720 ground-based radar, the drone uses a radio frequency sensor to trigger its warhead when it gets close enough to its target.

The UAV was developed over the past couple of years under an accelerated timeline, forgoing the conventional US government development and production process so that the US Army could field the defensive weapon sooner. After Iran allegedly used explosive-laden UAVs to attack Saudi Arabia’s oil facilities in 2019, the US Army has been hurriedly looking for a way to defend against loitering munition-like weapons.

Coyote Block 2 was given a small jet engine, instead of its predecessor Block 1’s propeller, because the US Army wanted something that could get to its target faster, as well as engage at longer ranges. The UAV has a range of at least 5.4nm (10km), although Ghanooni declines to give specifics.

Raytheon also fields a “non-kinetic” Block 3 version of the Coyote. That UAV is powered by a propeller like the original vehicle and uses an electronic warfare payload to down drones. Ghanooni declines to say the type of electronic warfare weapon that is employed.

The Coyote’s command and control system uses algorithms to rapidly decide what type of UAV to deploy.

Ghanooni declines to say specifically how many Coyotes the US Army has purchased, but notes the number is in the hundreds. He declines to say where the UAVs will be deployed, other than to say “high-threat” areas.