Airbus subsidiary Satair is taking over A220 materials servicing from Bombardier, a move that comes several years after Bombardier divested the broader A220 programme to Airbus.

The European airframer says the move brings parts serving for its entire lineup of commercial aircraft in-house under Copenhagen-based Satair.

“There is one go-to, and that is Satair, for all the parts customers will need,” says Satair chief executive Bart Reijnen. 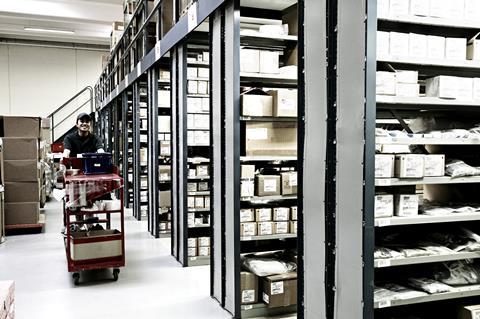 A Satair warehouse in Copenhagen

The companies began transferring parts and other equipment related to A220 parts servicing from Bombardier’s facilities to Satair sites in July.

Transfers will be complete by the end of September, says Reijnen.

He declines to disclose the value of the stock acquired from Bombardier.

Bombardier had retained A220 materials servicing after divesting the A220 programme – formerly known as the CSeries programme – to Airbus in 2018.

“Customers will now be dealing with just… a single interface” under Satair, adds Rob Dewar, senior vice-president of A220 customer service, customer satisfaction and product policy.

He calls the change a “key step in the integration of the A220 programme into Airbus”.

Material service providers hold inventory of aircraft parts and furnish those parts to airlines. Satair’s services include aircraft-on-ground support, which involves ensuring airlines have parts needed to get maintenance-grounded jets back in the skies.

Airbus retains management of so-called “rotable parts” for A220s. Such components are examined and refurbished before being returned to service.

“This set up is not specific to the A220. It is the same for all other Airbus” aircraft, says Reijnen.

Satair holds an inventory of more than 1 million different types of parts and has 10 facilities globally. Outside Europe, the company has sites in Beijing, Singapore, Dubai and several in the USA.