Momentum on the rise in electric air taxi sector

Electric air taxis have descended on the NBAA show in Las Vegas this year, with several developers promising the emerging sector could soon eclipse traditional business aviation in size. 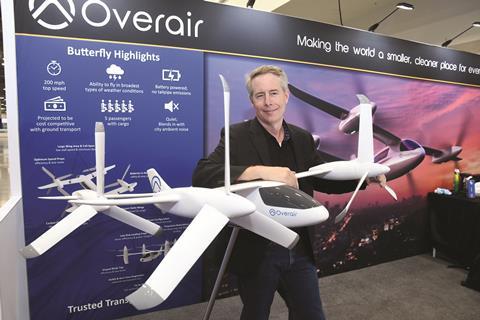 “The world of urban air mobility is quite possibly going to be even larger than today’s business aviation community,” claims Benjamin Tigner, president of Overair, a California company developing a six-seat, two-winged eVTOL with four props called Butterfly.

That is a message NBAA chief executive Ed Bolen gets behind.

“We want to make this a ubiquitous and equitable type of transportation service,” says Kitty Hawk director of flight operations Chuck Taylor. “From a traditional aviation perspective, it’s really pushing the boundaries to make things cheaper and more effective.”

Heaviside, an eight-rotor electric-powered autonomous aircraft that has a range of about 87nm and can fly at speeds of up to 156kt, was launched in 2019.

“Several dozen” have already been built and flight testing is well under way, Taylor says. The company hopes to begin testing the aircraft with passengers “in the next few months”.

The Palo Alto-based start-up, backed by Alphabet’s co-founder, Larry Page, is looking to establish an eVTOL market that will be accessible to a large swathe of the population.