Japanese investigators believe biocide treatment of fuel on a Jetstar Airways Boeing 787-8 led to the aircraft’s losing thrust in both engines during a service to Osaka’s Kansai airport two days later.

The aircraft (VH-VKJ) had departed Cairns on 29 March last year.

As it descended through 16,100ft (4,900m) towards Kansai, the crew started to receive instability indications from the right-hand General Electric GEnx-1B engine.

Both messages subsequently disappeared. But the aircraft systems recorded that the left engine had been operating below idle thrust for 8s and the right engine for 81s. 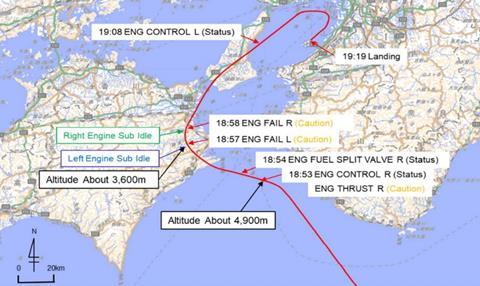 As a result of the right engine’s unstable performance, the crew disengaged the right-hand autothrottle and set the right-hand thrust lever to ‘idle’. The jet landed safely at Kansai about 20min later, and none of the 313 occupants was injured.

Japan Transport Safety Board investigators found that an accumulation of magnesium salts had impeded the movement of spools within the engines, destabilising the fuel metering and leading to engine speed oscillations sufficient to dip temporarily below idle.

Similar oscillations – not large enough to be detected – had been occurring on the aircraft since it underwent biocide treatment at Auckland two days before the incident.

The biocide was introduced by uplifting 25,000kg of fuel to the centre tank, plus 4,000kg to the left wing tank and 3,500kg to the right wing tank.

Owing to differing quantities of residual fuel already present in each wing tank, the concentration of biocide for this additionally-uplifted fuel had to be individually calculated in order to achieve the 100ppm required.

The inquiry says a concentration of 250ppm was needed for the left tank and 285ppm for the right.

But it says there was “no record” of the actual calculation made, or the dosage used, during the treatment.

“It is desirable to keep these records because they are considered to be important for traceability of maintenance work,” it points out.

The investigators also believe that the added fuel, with the higher biocide concentrations, “did not mix evenly” with the residual fuel in the tanks before being fed to the engines.

This failure to achieve even distribution could have been influenced by fuel temperature and density, as well as the interior structure of the tanks, but the inquiry could not determine how much of the fuel was not mixed.

All three fuel tanks were treated with Kathon FP 1.5, a biocide which has since been withdrawn from aviation use following other engine thrust incidents.