Collins Aerospace is promoting a range of mission systems at the Singapore Airshow, from advanced reconnaissance capabilities to its ACES 5 ejection seat.

Richard Jerome is senior director of international business development, mission systems at Collins Aerospace. He says that Asia-Pacific defence customers are interested in improving situational awareness, ensuring battlefield communications, interoperability with US forces, as well as simulations and training. 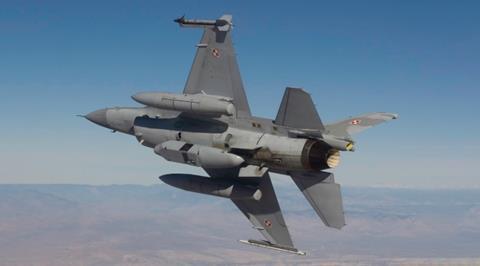 One system the company is promoting is its MS-110 multispectral airborne reconnaissance system, which is available under the US government’s Foreign Military Sales process.

The MS-110 can be carried by the Boeing F-15 and Lockheed Martin F-16, as well as other platforms. Collins says it is capable of imaging in multiple visual and infrared bands at long stand-off ranges.

“By definition, you can scan multiple bands in the spectrum, and have the ability to superimpose images from different parts of the spectrum, to get a better definition and better view of what’s out there,” says Jerome.

On the communications front, the company is promoting its AR-1500 (Airborne Radio 1500). The system uses the Saturn waveform, which is far more resistant to communications jamming. It also greatly enhances interoperability with US forces.

“The USA is already using [the Saturn waveform] and some NATO allies too,” says Jerome. “It’s faster and more difficult to jam.”

Collins says the AR-1500 is resistant to jamming

Jerome also notes the companies training and simulation systems, particularly for advanced assets such as the F-35.

“In order to be effective, you need to train, and you need simulation tools, because you can’t afford to be using real assets all of the time,” he says.

In particular, the company is focused on live virtual constructive training, which mixes live and simulated assets.

“We’re very proud of some of the work we do in the USA on next generation air combat training.”

He cites work with the US navy under the Tactical Combat Training System Increment II programme, which allows for a highly flexible training environment, incorporating a range of assets and capabilities.

Also falling under the Collins Mission Systems umbrella is the company’s ACES 5 ejection seat. The primary platforms for the seat are the F-15 and F-16. Collins sees opportunities regionally to upgrade air forces using the legacy ACES 2 seat, as well as provide ACES 5 for newly acquired assets.