A UK project to explore the potential of hypersonic propulsion received a major boost at the Farnborough air show, with plans announced for a flight-test activity to take place later this decade. 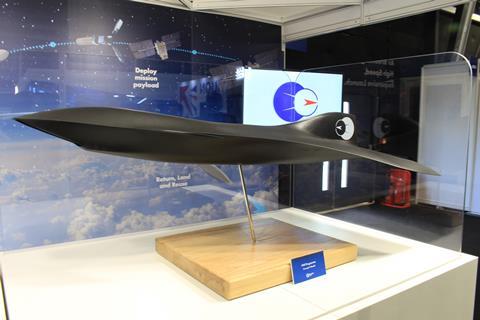 A ‘Concept V’ HVX vehicle – to be scaled around the size of a BAE Systems Hawk trainer – will be flown for the first time “well within this decade”, says Air Vice-Marshal Linc Taylor, the RAF’s chief of staff, air capability.

“One of the things we believe will have value in changing the way we fight is reusable hypersonics,” he says. The experimentation will provide “the evidence as to whether this plays a part in our future orbat [order of battle]”, he adds, while declining to reveal potential operational applications for such a capability.

“The project has set off at high pace and we expect to maintain that throughout this demonstration phase,” he says.

The company is already testing its technology in advance of integrating it with an unidentified donor engine.