Loss of braking due to hydroplaning, shortcomings by Miami Air International and errors by one of its captains caused a Boeing 737-800 to overrun a Jacksonville runway on 3 May 2019.

That is according to the National Transportation Safety Board (NTSB), which released its final accident report on 4 August.

The NTSB attributes the accident, which occurred at night and injured one person, to “extreme loss of braking friction due to heavy rain and the water depth on the un-grooved runway”. 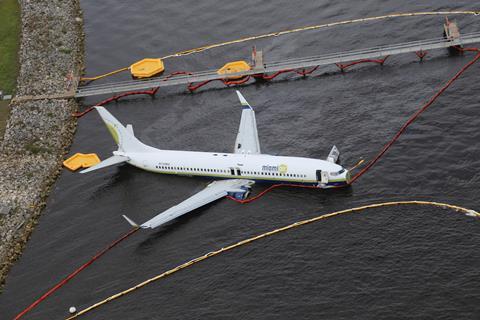 The jet came to rest in the St Johns River

The NTSB’s report also cites pilot shortcoming, noting that the captain failed to break off what was an un-stabilised approach.

With the pilots nearing their maximum legal duty time, and the flight already delayed, the captain may have felt pressure to land, the report says. The captain was also acting as check airman to the first officer during the flight, which may have diverted the captain’s attention.

“The flight crew did not follow procedures, including continuing an un-stabilised approach, landing the airplane at an excessive approach speed and delaying deployment of the speed brakes,” says the report. “However, investigators determined that even if none of those errors occurred, the airplane still would not have stopped on the un-grooved runway because the rainfall rate and runway characteristics contributed to water depths that caused the aircraft to hydroplane.” 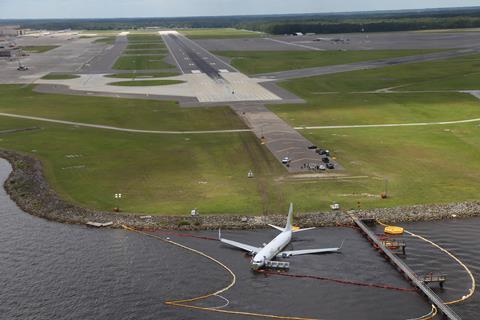 After landing, the aircraft failed to sufficiently slow, departed the end of Jacksonville’s Runway 10 and came to rest in shallows of the St Johns River.

The incident caused minor injuries to one passenger, though several animals, in the jet’s flooded cargo compartment, died, the NSTB says. The jet was carrying 143 people, including 136 passengers.

The pilots had initially planned to land on Jacksonville’s Runway 28, but switched to Runway 10 after air traffic controllers warned them of “moderate-to-heavy precipitation”.

A few minutes before landing, while the aircraft was at 1,390ft altitude, a controller notified the pilots they were above the glide path. During descent, the aircraft’s airspeed increased to about 170kt (315km/h), which was about 17kt faster than the target speed. It also drifted 67m (220ft) right of the runway centreline.

“Sink rate” alerts sounded in the cockpit and the jet crossed the runway threshold at a descent rate of 1,450ft per minute. The rate should not have exceeded 1,000ft per minute, the NTSB says.

With a 12-13kt tailwind, the jet touched down at 21:41 local time, 1,580ft past the runway’s displaced threshold and 580ft beyond the target touchdown point.

The jet’s left-side engine thrust reverser was not working, but the pilots activated the right engine’s reverse thrust. The pilots braked the aircraft, though the captain told investigators that “the airplane did not decelerate”.

The 737 overran the runway and struck a seawall. Coming to a stop, flight attendants told passengers to don life preservers. Passengers evacuated via over-wing exits. The jet was intact but badly damaged.

The NTSB notes that another pilot, watching from the ground, said the jet landed in “blinding rain”

Due to “standing water” on the runway, the jet likely experienced “viscous hydroplaning”, which occurs when a tire rolls atop a film of water. 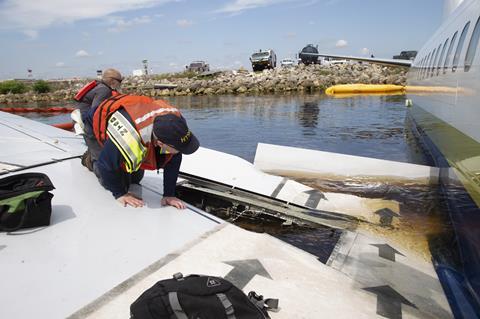