Embraer is looking at options for a freighter conversion programme for its E-Jets after identifying increased demand for smaller cargo aircraft as a result of the boom in e-commerce.

The manufacturer is forecasting demand for around 700 aircraft in the up-to-150-seat segment over the next 20 years as part of its latest market outlook – the first time it has included freight in its forecast. 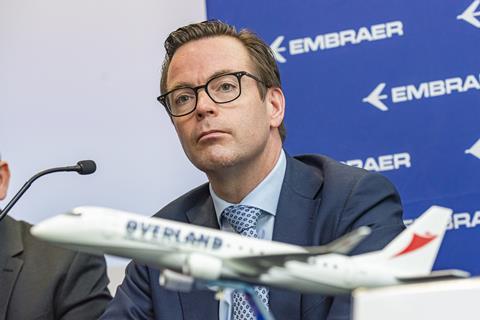 “We see exponential growth that requires different logistics and a smaller aircraft to be able to address the needs of the consumers and in a more reliable way,” says Embraer’s vice-president of marketing Rodrigo Silva e Souza during a briefing at the Dubai air show. ”So there is a need for a new size of aircraft.

He says the manufacturer is studying various conversion programme options. ”We are seeing a lot of interest from customers. We have not launched the programme yet, but we are really seeing a big demand for this size of aircraft and we are working internally on a project for this. We see the bigger demand for the 195-size.”

Embraer Commercial Aviation chief executive Arjan Meijer adds: ”You’ll see a decision in the next six months hopefully from Embraer on whether we proceed on that, with roughly a time-to-market of around 24 months.”