BendixKing is firmly back in the avionics business. Honeywell’s exclusive brand for general aviation cockpits is once again at the forefront of innovation with a suite of affordable and newly developed technologies

Towards the end of the last century, BendixKing was one of the biggest names in general aviation cockpits, with a heritage stretching back decades encompassing Bendix Avionics’ radar technology and King Radio. However, the business was late in responding to the rapid advent of the glass cockpit in the early 2000s that ended up transforming the sector, and it lost its crown. 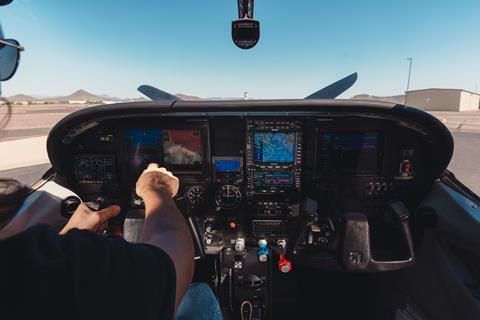 Ironically, Honeywell was a leading provider of defence, commercial airline and business aviation flight decks when it acquired BendixKing in 1999. But without its own more affordable glass cockpit offering for the owner-flyer and flight school segments, BendixKing resorted to relying on a replacement market for its legacy products.

However, the message from president Gregg Cohen is that BendixKing is very much back on the GA avionics battlefield, thanks to a strategy that has seen it develop over the past eight years – and under its own distinct brand identity – a suite of latest-generation glass cockpit and other avionics products for the aftermarket. Eventually, the Honeywell veteran aims to expand into the forward-fit space.

It was a claim borne out when we had a chance to experience BendixKing’s AeroVue integrated flight deck on board a Honeywell-owned Textron Aviation King Air test aircraft during a flight from Phoenix to BendixKing’s headquarters in Albuquerque. Descended from the same systems onboard Gulfstream and Dassault business jets, the product is as capable and pilot friendly as anything on the market.

The new approach followed a decision by Honeywell to revive the BendixKing brand in 2012, setting it up as a semi-autonomous business from Albuquerque. It means that, while BendixKing has been able to draw on its parent’s resources and intellectual property – AeroVue has the same user interface as Honeywell’s Primus Apex, for instance – the business has also been permitted to chart its own course.

This has seen it partner with, what Cohen calls, “the industry’s best”, including rival avionics specialist Avidyne, whose GPS navigation kit BendixKing has incorporated into its offerings. “By taking some of the technology out there on the market, we have been to build a breadth of products,” he says. An open architecture design philosophy means its avionics can be easily integrated with that of other manufacturers.

“We are able to benefit from Honeywell’s technology, but we also have our own entrepreneurial space,” explains Cohen. “This means we can take the technology from Honeywell, apply it to the unique needs of a private pilot, and take it into the GA space at an affordable price.”

As the business has found its feet, BendixKing has increased the speed at which it has been bringing products to the aftermarket. “Between 2012 and 2016 we certificated one product,” he says. “Now we have eight.” The next objective is to integrate its own and third-party equipment into a single cockpit offering that can be offered to aircraft manufacturers.

The business extended its appeal to another market earlier this year with the acquisition of privately held TruTrak Flight Systems, a leader in autopilots for experimental, light-sport and certificated aircraft – a market Honeywell notes has grown by double digits in five years. Since its founding in 1999, TruTrak has sold over 15,000 autopilots.

“TruTrak makes an inexpensive autopilot and experimental aircraft is a market that we were missing,” says Cohen. “Now we can use the acquisition to bring the BendixKing brand to thousands of light-sport and experimental pilots.”

BendixKing has been able to fly solo from its parent because its product range – focused largely on Part 23 class 1, 2, and 3 aircraft – does not overlap with Honeywell’s own premium avionics offerings. The only point where the two ranges might touch is single-engine turboprops, such as the Pilatus PC-12.

Culturally, the Albuquerque set-up remains distinctive too, with the relaxed feel of a start-up or family firm. “The key for this unit is to be nimble and get into the GA space,” remarks Cohen. “We are almost like a consumer company that can fast-track safe products and get them out to market quickly.”