Bleed air valves to cope with higher temperatures of modern engines, and technology to create a more comfortable working environment for fighter pilots are just part of the expanding portfolio of Honeywell’s mechanical systems & components business

Compared with touchscreen flight displays, advanced engines, and kit that accesses the internet at 35,000ft, the likes of actuators, coatings and valves might not seem the most exciting products in the Honeywell Aerospace portfolio. But the technology offered – and being developed – by the mechanical systems & components strategic unit of Honeywell’s Aerospace business is driving crucial advances in aircraft safety as well as the comfort of passengers and flightcrew. 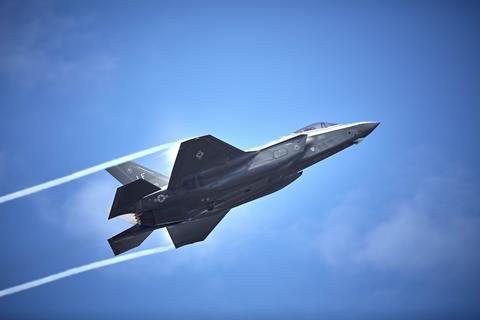 These include digitally-controlled valves that can regulate the pressure in a military jet cockpit at crucial fractions of a second faster than their traditional pneumatic alternatives – vastly improving the comfort of the pilot. Another example is thermal barrier coatings for blades that allow modern engines to withstand higher temperatures. Further down the line, Honeywell is working on a garment for military aviators that monitors the wearer’s body condition in real time, providing early warning signals of everything from hypoxia to exhaustion.

Mechanical systems & components comprises four main product groupings: actuators, braking systems, life support systems, and coatings. A fifth part of the business manages the US government’s nuclear facilities. The reach of the strategic business unit is impressive. The entire fleet of US military fighters and trainers, not to mention every Gulfstream business jet and significant numbers of other commercial airliner, military and business aviation types use Honeywell cabin pressure systems. Meanwhile, aircraft equipped with the company’s wheels and brakes land every five seconds somewhere in the world.

The digital cabin pressure control system under development – which is pitched at business aviation manufacturers as well as the military sector – could make a marked improvement to the working environment in the cockpit, says Tom Hart, vice president of mechanical systems & components. “When you have a jet accelerating faster than the valve can keep up, the pilot is going to experience discomfort. Our digital electronically controlled valves are so much more reactive and can regulate the pressure in the cockpit much quicker,” he says.

Honeywell has also been working on ways to help engines run at higher temperatures. Among other propulsion components, it makes bleed air valves, which have to cope with a hotter environment on newer engines such as the CFM International Leap that powers the Boeing 737 Max and many Airbus A320neos, and the GE Aviation GE9X on the 777X. Utilising advanced alloys and hardened electronics, Honeywell has come up with valves that run efficiently at higher temperatures. With the next-generation narrowbodies likely to require even hotter engines, Honeywell is ideally placed to provide the technology that will be able to cope, says Hart. Honeywell has used the process for its own engine blades for some time (its first generation TBS system was deemed so vital to national interests that a patent was granted under a secrecy order), but has since 2017 been offering them to third parties, including GE Aviation, Pratt & Whitney and Rolls-Royce. Last year the company added a second coater at its Greer, South Carolina facility to cope with expected additional demand, and a third will arrive in mid-2020. “It’s a value-added service for our customers which saves them investing in this themselves,” says Hart. “We have spent significant capital investment in this.”

In the military sphere, Honeywell has been working on advanced cooling techniques for a new breed of directed energy weapons aimed at countering threats from the likes of small unmanned air vehicles. Once again, these can only work successfully if the large amount of heat generated can be dissipated quickly and effectively. “One of the things Honeywell is very good at is developing high capacity, efficient cooling systems,” says Hart. “While this is a newish market, it could grow into a multi-billion dollar industry and we think we are in a good position to provide the cooling technology.”

Another emerging market where Hart feels the business is placed to play a role is urban air mobility, where lightweight, electric-powered platforms will need cooling systems. Hart says that the equipment on today’s military aircraft can be replicated on a UAM . However, the costs must be significantly reduced. “Our pedigree is in commercial aviation, military and space. We have a technology that works today but would never be affordable on a UAM,” he says. “It is a process of design to cost – in this case, design for a much lower cost. We are looking at different materials. But it’s proven flightworthy equipment.”

When it comes to predictive maintenance and Honeywell Forge, the strategic business unit is also heavily involved. A number of airlines are evaluating Honeywell’s connected ECS solutions, which predict in advance when a value or heat exchanger may need to be replaced or repaired. “We can tell operators immediately what the problem is and what they need to do,” says Hart. “People often underestimate the problems that can be caused when even seemingly minor equipment like this goes wrong.”

Perhaps one of Honeywell’s most exciting developments in the life support systems sphere is the garment for fighter pilots – in effect a comfortable t-shirt that seamlessly integrates cardiac, breathing, and motion sensors as an integral and imperceptible component of the garment. It is due to be subject to a series of test by the Navy, under an effort funded by the Defense Innovation Unit. If successful, these wearable biosensors could act as a physiological black box – to shed light on Unexplained Physiological Episodes. “It fits well into our whole data play,” notes Hart.

It may not have the glamour of other parts of Honeywell’s aerospace business, but when it comes to technological disruption and innovation, the mechanical systems & components unit is doing it bit to improve the way the world flies.