Jun Xu is part of a 400-strong engineering team with Honeywell Aerospace in Shanghai focused on local OEM customers. He describes the part he and his colleagues have played in the journey to first flight and beyond of China’s first modern narrowbody

When the Comac C919 made its maiden flight on an overcast day at Shanghai’s Pudong International Airport on 5 May 2017 it was a proud moment for Jun Xu. “China’s truly home-grown aircraft broke through the ‘dark clouds’ that have hung over China’s aviation industry for countless years, soaring into a dazzling future,” he noted poetically in a blog entry. “That day will forever be a magnificent one for China’s aviation industry.” 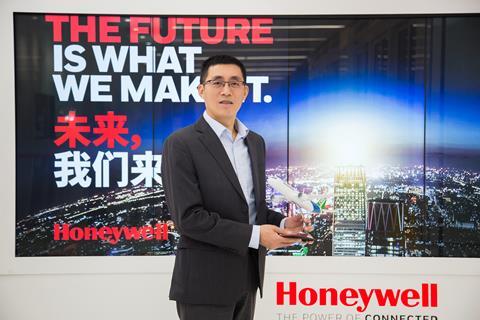 Xu had every right to feel emotional as he watched the aircraft rise into the skies. He had spent four years working on the single-aisle programme as head of a 400-strong engineering team in Honeywell’s engineering centre in Shanghai. However, his involvement with the narrowbody went back to its development launch in 2008, when he was an engineering leader for GE Aviation.

He described in 2017 how his “eyes glistened” as he recalled the decade he had spent “front and centre with the C919” from the foundation of Comac to the first sortie. Two-and-a-half years later, Xu is still intimately involved with the C919, not in an engineering role but as vice-president, air transport & regional, where for the past 18 months he has looked after Honeywell’s OEM accounts in the region.

Honeywell’s participation on the C919 is extensive. As well as wheels, tyres and brakes – supplied by Chinese joint venture partner HBAS – Honeywell provides a version of its HGT750 auxilliary power unit developed for the narrowbody, together with inertial reference systems.

As the main contact between Honeywell and its OE customer, Xu’s job involves “managing the strategic partnership” as well as “pursuing new opportunities”. A third responsibility, he says, is “programme execution”. He remarks: “When we work with Comac, we are always thinking about how we develop safe and efficient aircraft to drive growth in aviation, as a partner and not just a supplier. These OEMs are in the process of maturing their capabilities, not just technically, but in their management systems. We are working with them through this learning process, so they can grow much faster.”

Honeywell Aerospace has had a major presence in China for decades and this footprint has grown with the domestic industry. “To have 400 engineers in this region is very unique,” says Xu. “All of them played a key role in the C919 and other in-region programmes.” He was one of them, but says his new job, although customer-facing rather than purely engineering focused, is not that much of a departure. “I had a lot of experience working with these OEMs already, and moving to this role was a chance to continue to focus on working with customers to drive business growth, at a different level,” he says.

Xu believes the potential for Chinese airframers is “incredible”, with the C919 capable of becoming a significant new comer and competitive narrowbody aircraft in the market, and the fast-expanding cities of China’s more remote west requiring the sort of rapid regional links the ARJ21 can provide. “Comac is forecasting 1,900 deliveries of the C919, so it is a huge opportunity for us,” he says. Honeywell is now set to reap the rewards of the investment it made in the market almost two decades ago. “Patience is required, but we do see an important pay-out enabled largely by our footprint in this market.”

After studying mechanical engineering in China, followed by an engineering doctorate in New York, Xu worked for GE Aviation in Cincinnati for 10 years before transferring to Shanghai. While there he took the opportunity to move to Honeywell in 2013, where he was offered a major role leading its aerospace engineering team in China. Xu says he has had “the great fortune” to participate in both the C919 and the ARJ21 programmes, “combining my knowledge with my desire to grow China’s aviation industry”. He and his Honeywell colleagues in China, he says, are “really excited to be on this journey”