5
Easier on the eye
Honeywell: Shaping the Future

Easier on the eye

Honeywell has been designing intelligent flightdecks for decades, but the next generation of technology will see them become even more intuitive and connected - to help the eventual transition to single-pilot and eventually fully autonomous aircraft

From the early days of aviation, Honeywell and its legacy businesses have played a leading role on the flightdeck, leading the evolution from electromechanical instruments to cathode ray tube displays and then to liquid crystal display (LCD) technology. The introduction of the Primus 1000/2000 glass cockpit for business and regional aircraft in the 1980s helped drive the transition from analogue, with flight data displayed on easy-to-read screens rather than on numerous separate dials and indicators. 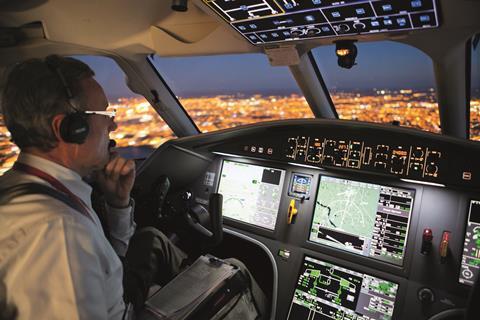 Honeywell has been a leader in cockpit technology for many years

Today, Honeywell Aerospace continues to lead the way in avionics – displays, information management systems, and flight management systems – for commercial, military, and business aircraft, and is preparing for the next likely cockpit change: the advent of single-pilot passenger transport operations. Although this is some way off being agreed by the regulators – cargo flights might come first – Honeywell wants to be ready. “We are preparing ourselves for that next revolution in architecture,” says Mike Ingram, vice president of cockpit systems within Honeywell Aerospace’s electronic solutions strategic business unit.

That transition will require a “more intuitive, connected cockpit, where potentially the ground or eventually the avionics can take over if something goes wrong,” he says. That might include technology that is able to monitor the behaviour of the sole pilot, providing warning signs of incapacitation, excessive stress or fatigue. There will also need to be an industry-wide campaign by regulators, airlines, airliner manufacturers and avionics suppliers to convince the public that getting on board an aircraft with one pilot is perfectly safe, adds Ingram.

In the meantime, many of the technological innovations that will eventually open the way for single-flightcrew operations will also make for an easier day at the office for current pilots. “It’s about making the cockpit more compelling, with higher-resolution images, touchscreens, more colours, better graphical interfaces,” he says. “Our job is to make the cockpit more intelligent and intuitive, ensuring that the pilot is being shown the right information at the right time, and countering information overload.”

Recent launches, including the latest Surface Indications and Alert System (SURF IA) that gives pilots indications of potential runway incursions, are already being incorporated into Honeywell’s avionics offering. SmartRunway and SmartLanding are two other software enhancements for the Runway Awareness and Advisory System feature on Honeywell’s Enhanced Ground Proximity Warning System that improve safety and increase situational awareness during taxi, take-off and landing.

When it comes to future developments in avionics, artificial intelligence will also “start to enter into things”, with technology on the horizon that “understands” what the pilot intends to do and reduces menial tasks, suggests Ingram, who hints that the next 24 to 36 months could see revelations of progress Honeywell has made in this area. “We have a number of projects in development but nothing that we can talk about just yet,” he says.

Although Honeywell flight management systems and other software are present in a number of Airbus, Boeing and other types in air transport, it is business aviation that dominates the company’s forward-fit integrated cockpit activities. Honeywell addresses the market down to superlight jets and large turboprops such as the Pilatus PC-12 NG under its own brand, with BendixKing (see Page 10) serving the general aviation segment. Today’s Primus family includes latest versions of the Epic (for two-crew business jets), Apex (single-pilot turboprops or light jets), and Elite integrated avionics systems.

With the biggest manufacturers, such as Dassault and Gulfstream, Honeywell has collaborated to design bespoke cockpits based on its Epic design, the EASy in the case of the Falcon family, and PlaneView and Symmetry with Gulfstream. The Symmetry cockpit that features on the G500, G600 and still-to-fly G700 flagship is one of the most advanced in business aviation, with integrated touchscreen controllers aimed at making displays “more intuitive, integrated and significantly more user-friendly”.

Other attributes include SmartView synthetic vision, which improves the pilots’ situational awareness by providing a large, 3-D, colour synthetic image of the outside world; a Next Generation Flight Management System that Honeywell says is optimised for future air traffic management functionality and to improve fuel efficiency, 2-D and 3-D moving maps showing runways, taxiways, airport structures and signs at many airports in two dimensions, while a 3-D moving map integrates the synthetic vision system for an “out the window” view of the airport on the primary flight display.

While the technology itself is impressive, Ingram says there are two main drivers behind Honeywell’s declared mission to develop avionics solutions “that help manufacturers design aircraft that can go anywhere, go anytime, and go for less”. One is to make flying safer, by reducing pilot workload, distractions and stress, and the other is to save money for the ultimate customer by making their operations more efficient. “Ultimately all operators want to get their costs down,” he says. “And with the industry facing a shortage of experienced pilots, they will achieve that if they can reduce the number of pilots they employ.”