The Australian Transport Safety Bureau (ATSB) has released its preliminary report into the fatal crash of a Lockheed Martin EC-130Q during firefighting operations.

The crash occurred at 13:16 local time on 23 January near Peak View, New South Wales, killing all three crew members. The aircraft involved was operated by Coulson Aviation, and bore the registration N134CG (MSN4904).

After departing from RAAF Richmond at 12:05 the aircraft was diverted from its initial drop zone to a secondary tasking.

“Witnesses reported seeing the aircraft complete a number of circuits, prior to completing the retardant drop,” says the ATSB.

“The drop was conducted on a heading of about 190°, at about 200ft above ground level, with a drop time of approximately 2 seconds. The crew released about 1,200 US gallons (4,500 L) of fire retardant during the drop.” 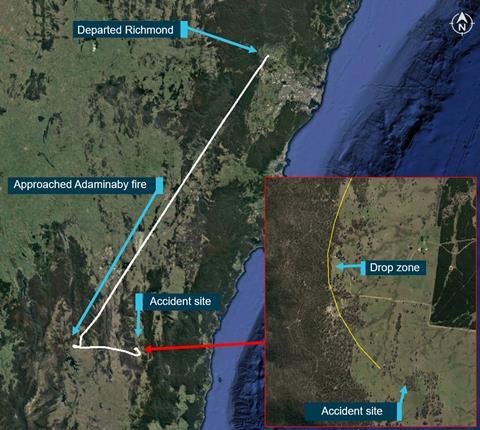 After the drop, say ground observers, the aircraft banked left and was obscured by smoke for about 15 seconds. When the aircraft reappeared it was “flying at a very low height above the ground, in a left wing down attitude. Shortly after, at about 13:16, the aircraft collided with terrain and a post-impact fuel-fed fire ensued. The three crew were fatally injured and the aircraft was destroyed.”

No distress calls were made prior to impact. 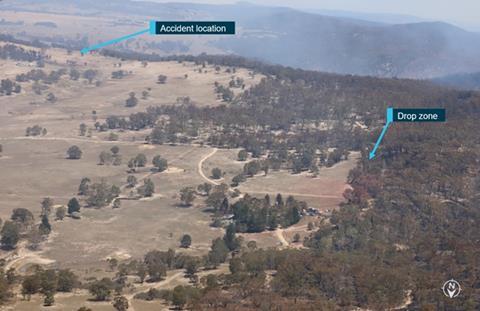 Overview of the drop zone

The initial investigation suggests the aircraft hit a tree when in the left wing down attitude prior to colliding with the ground. An emergency dump of retardant was not activated.

Meteorological information on the day of the crash indicated gusting winds and “severe turbulence below 5,000ft above ground level.”

The ATSB recovered the aircraft’s cockpit voice recorder, but found no audio from the accident flight, only audio from a previously flight in the United States. The investigation will also look into this issue. 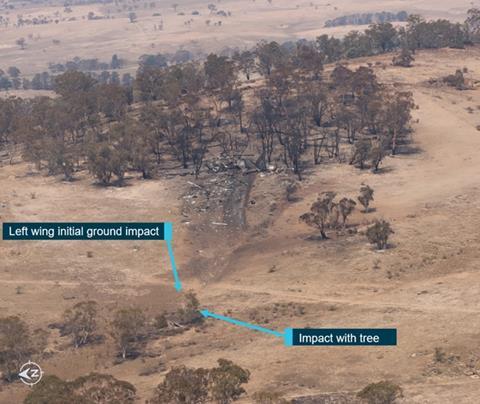 According to Cirium fleets data, the aircraft was delivered new to the US Navy in 1981. It later served with NASA for experimental work from 1992 to 1993, at which point it was placed in storage.

Coulson acquired it in 2017 and converted the aircraft to perform aerial firefighting work. Coulson’s firefighting C-130s are equipped with a RADS-XXL roll-on, roll-off tanking system that can carry 4,000USgal of fluid.